Over hill and dale along the Mount Vuache 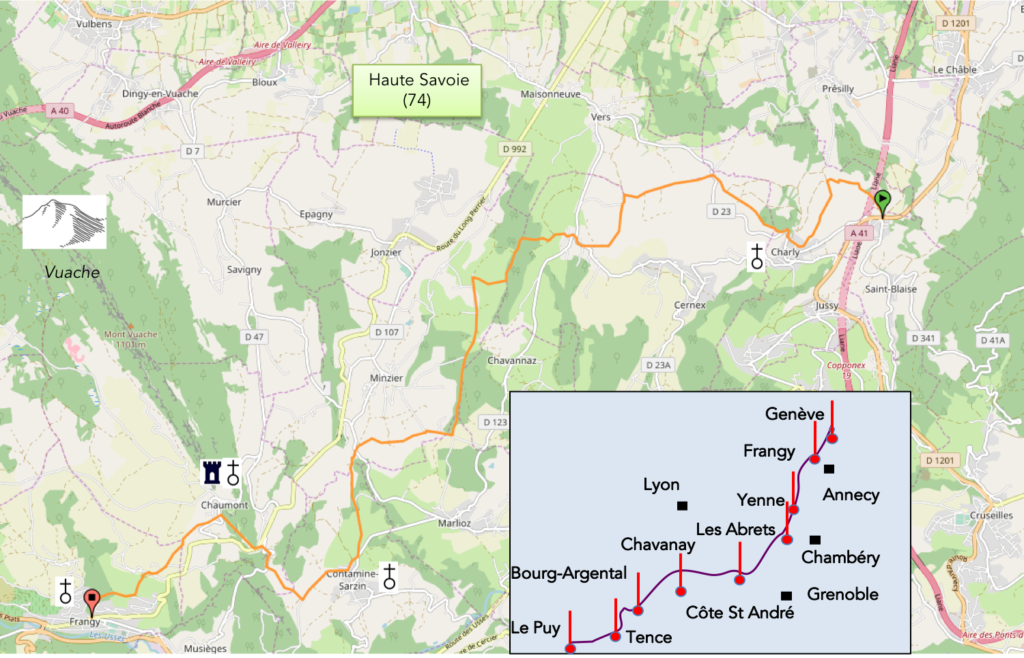 Today’s route is a long transition back to the Rhône valley, which will be found the next day. Because the Rhône River, when leaving Switzerland, makes a big detour behind Mont Vuache, a sort of barrier between Switzerland and France, near Bellegarde. The course passes all day through the undergrowth in the countryside. We can only wish you to walk here in good weather, because, if, unfortunately, you cross this region in prolonged rainy weather, you will have to conscientiously clean your shoes on arrival, the paths being numerous and often turned into mud torrents.

Difficulty of the course: Slope variations (+416 meters /-872 meters) speak more for a downhill stage. There is only a severe climb. But this one counts. This is the climb to Chaumont. As for the descents, they are not all easy. There are many slopes above 15%, but it’s downhill, for those with not too rusty joints.

In this stage, a large part of the course takes place on dirt roads, which is quite rare and should be emphasized:

Section 1: Over hill and dale between meadows and woods. 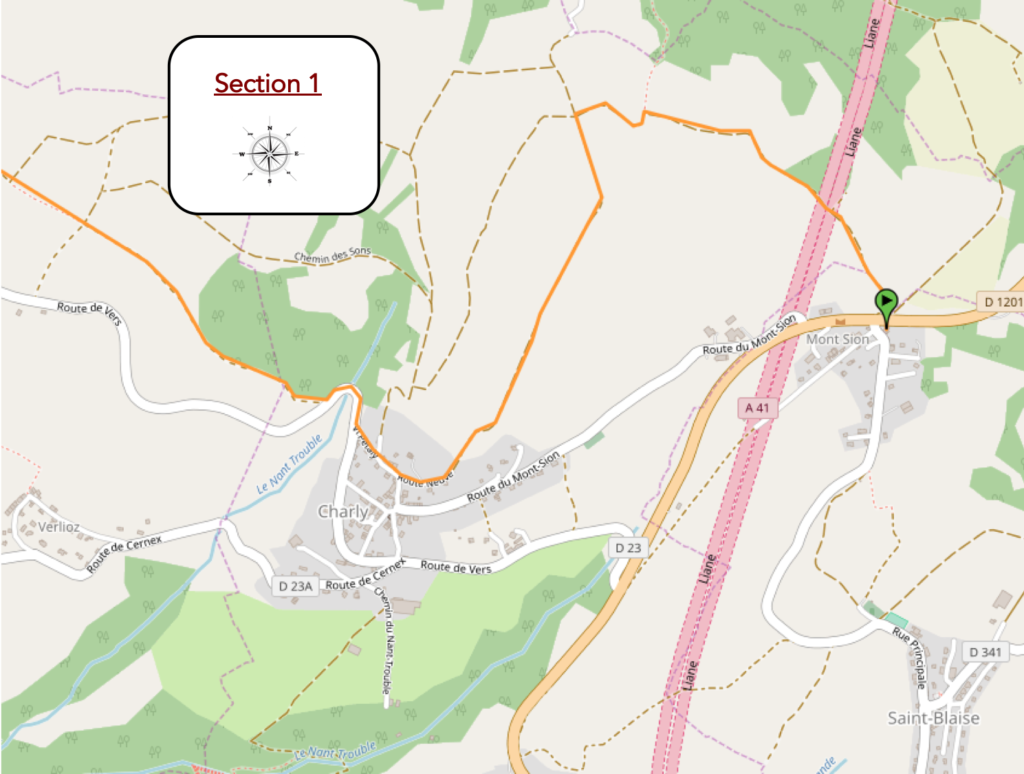 General overview of the difficulties of the route: a steep climb at the start of the stage, then hilly areas without much consequence.

GR path leaves Mont-Sion Pass at the crossroads of the road that climbs to St Blaise. 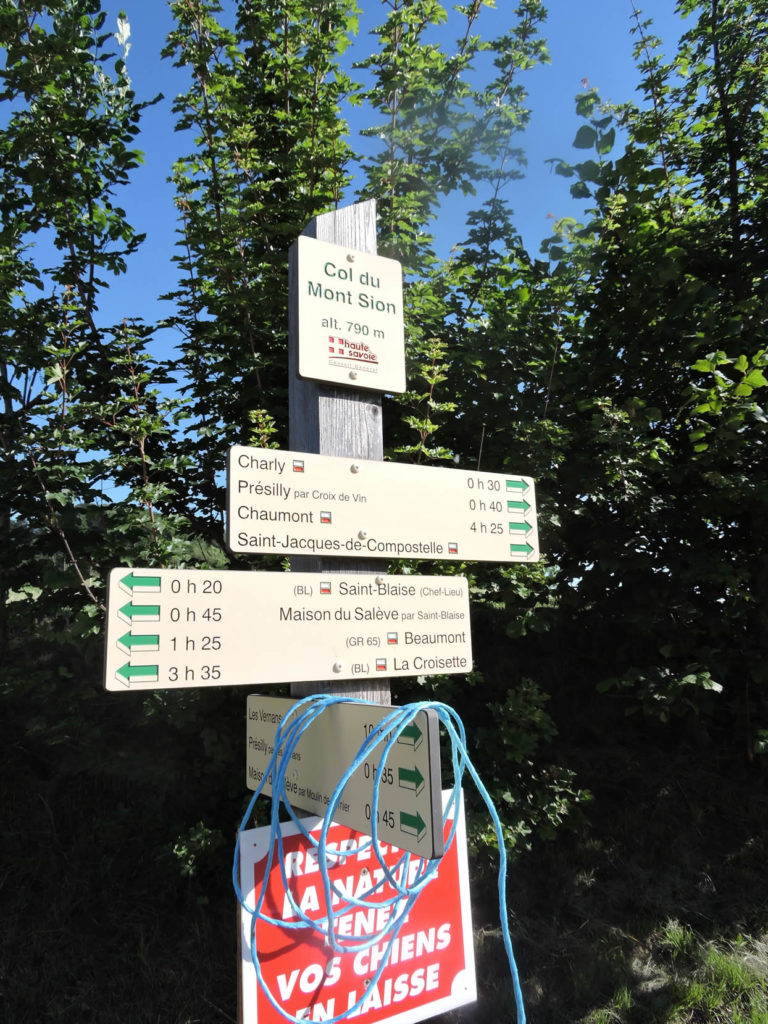 Below stand the houses of Mont-Sion Pass. 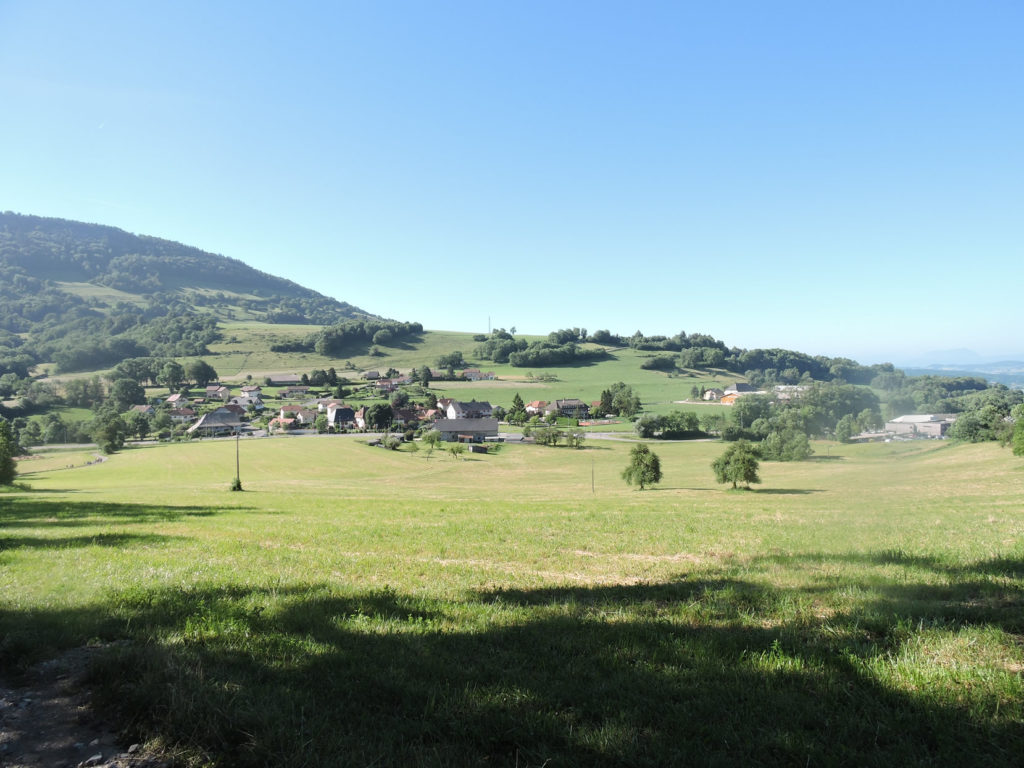 Section 2: With the Vuache Mountain, on the horizon in front of you. 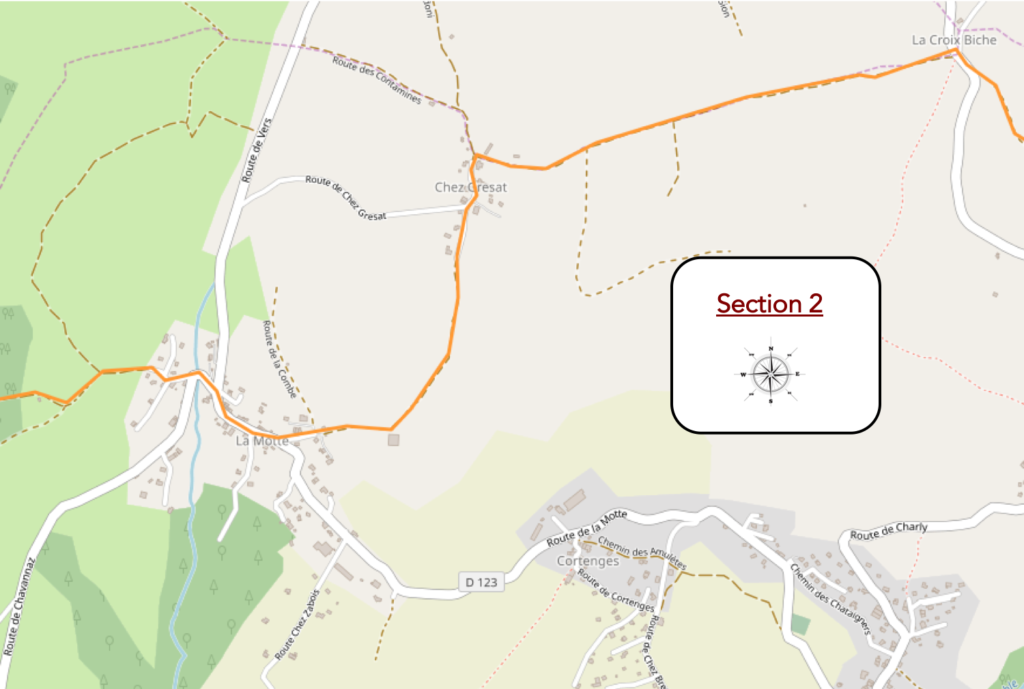 General overview of the difficulties of the route: downhill especially, but rarely leg-breaking, except at the bottom of the dale.

You get at the place called Bacchus, in the middle of the fields. 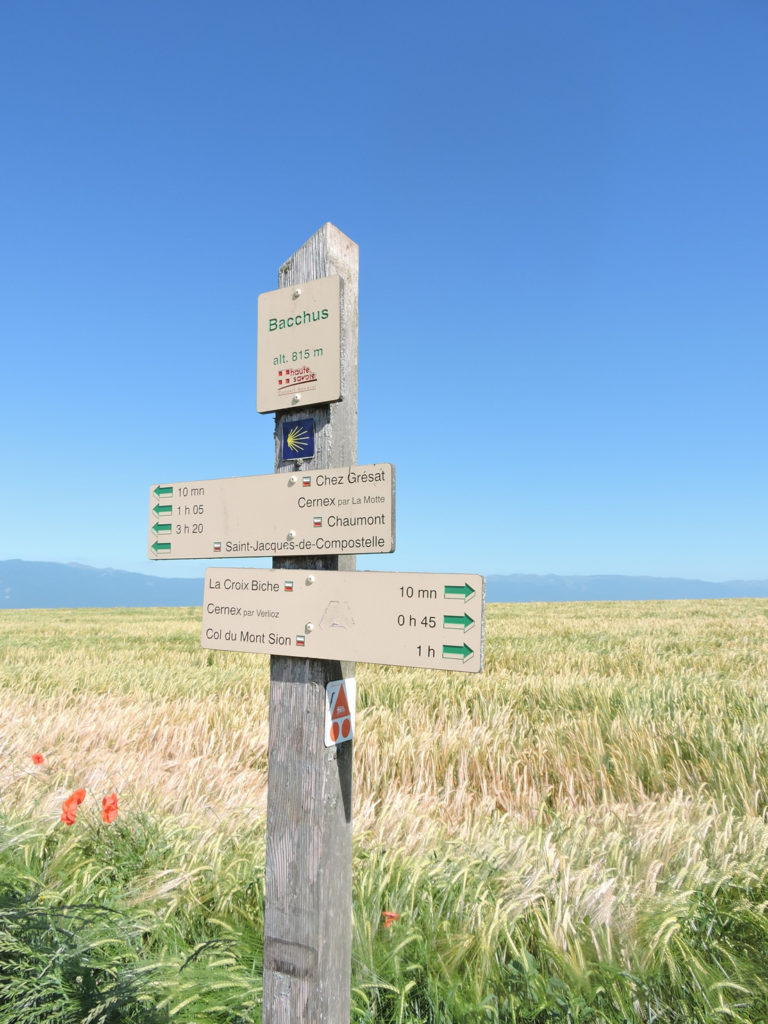 Here the poppies dance in the oats. 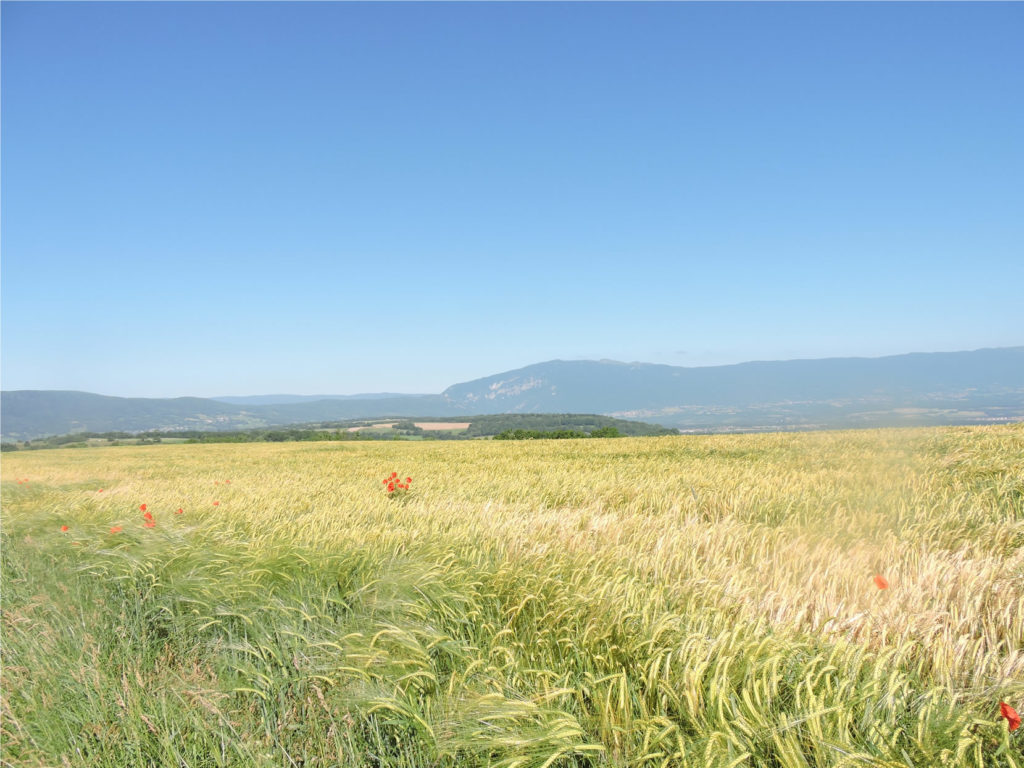 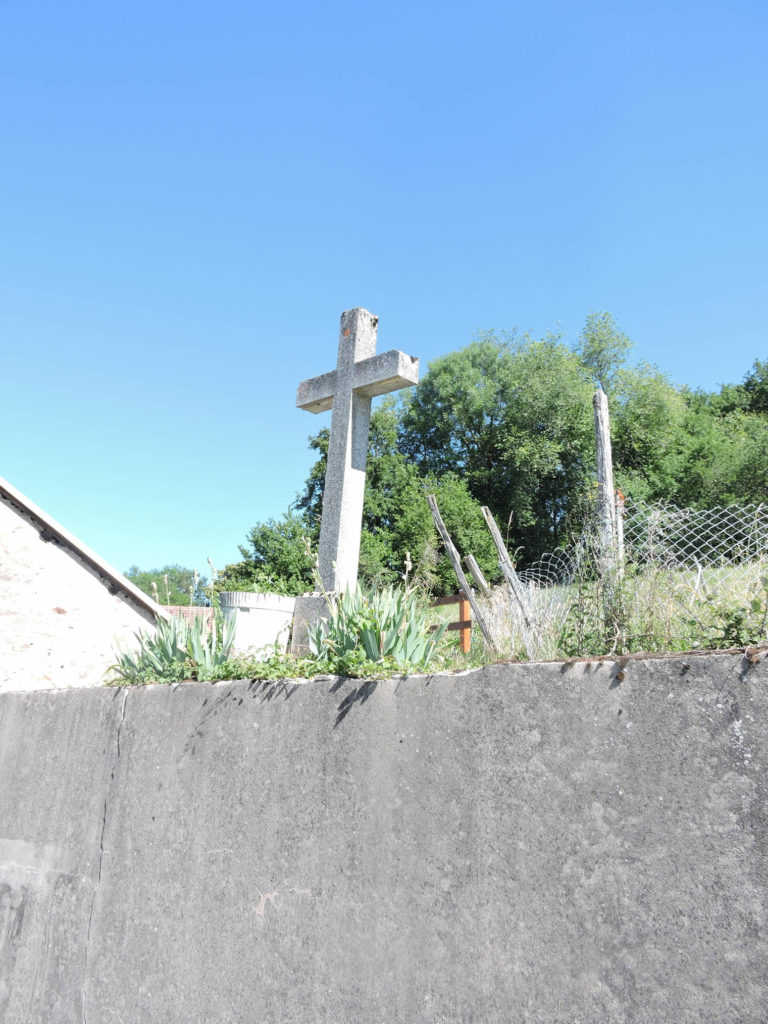 A beautiful iron cross planted in the foliage marks the Chemin des Côtes. From here, the track will pass for a long time far from the villages, often in the undergrowth, in an area where there will be little human presence. 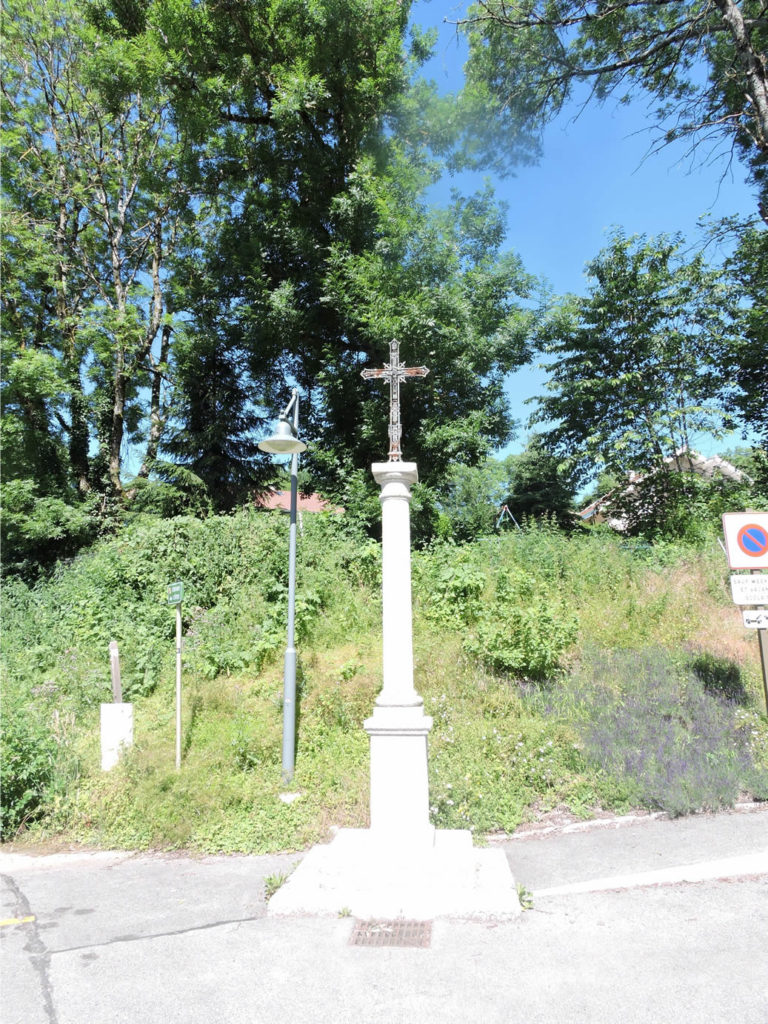 Section 3: At the foot of Vuache Mountain.

General overview of the difficulties of the route: downhill especially, without major problems, except before Verney, where the pathway can be bogged down.

The pathway then arrives in the place named Sur Le Sion, where a variant leads to Contamine Sarzin via the village of Marlioz. GR path heads to the locality called Couty. 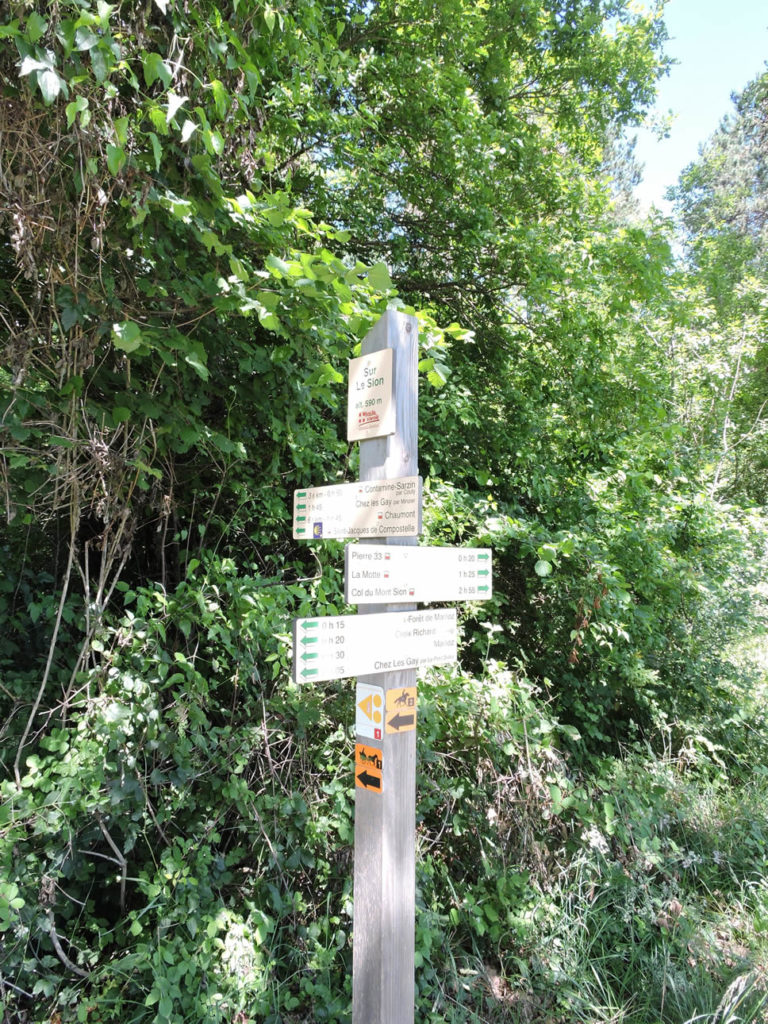 Section 4: In the dale where the Coquetière brook flows. 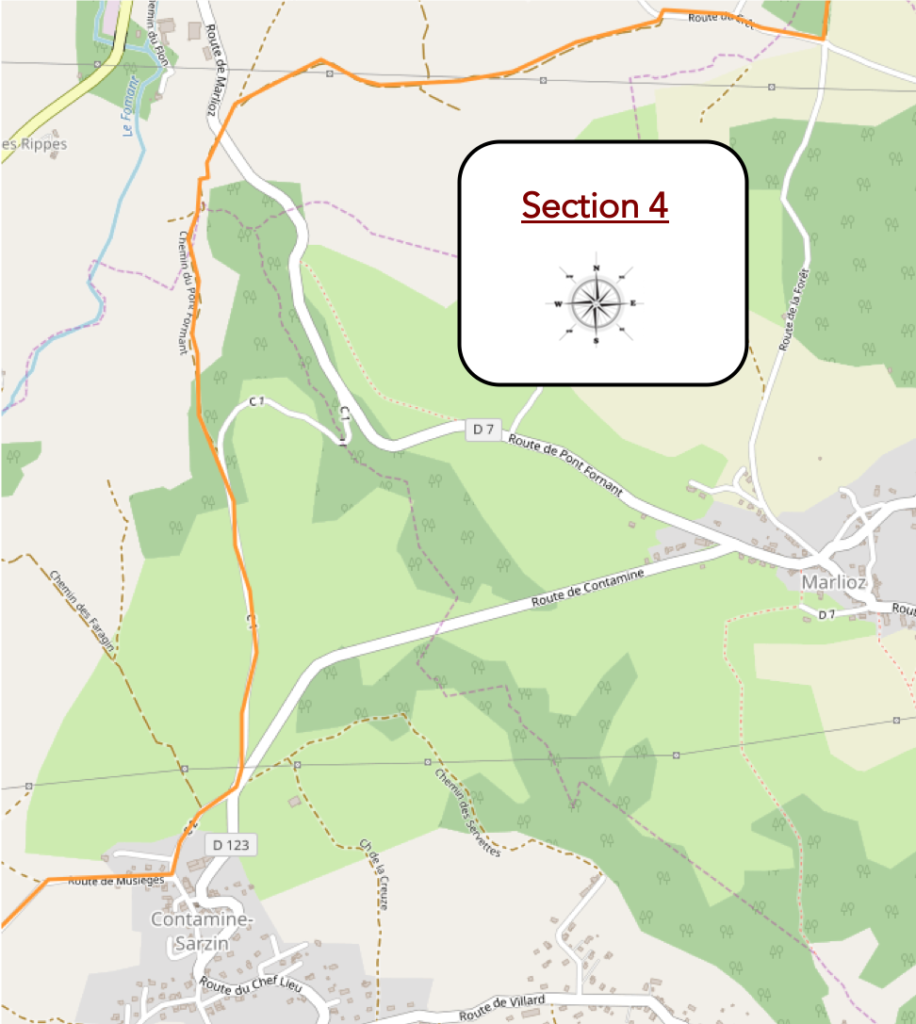 General overview of the difficulties of the route: ups and downs with some slopes sometimes quite steep.

The road then reaches the Plaine des Vernettes locality, a stone’s throw from Contamine Sarzin. 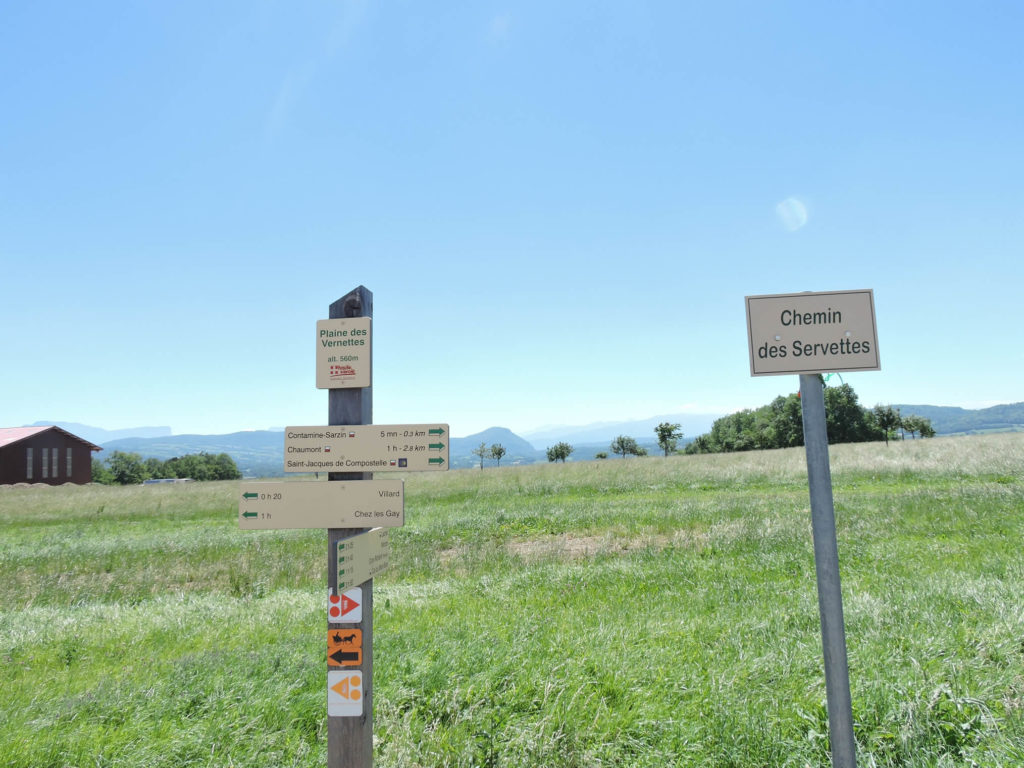 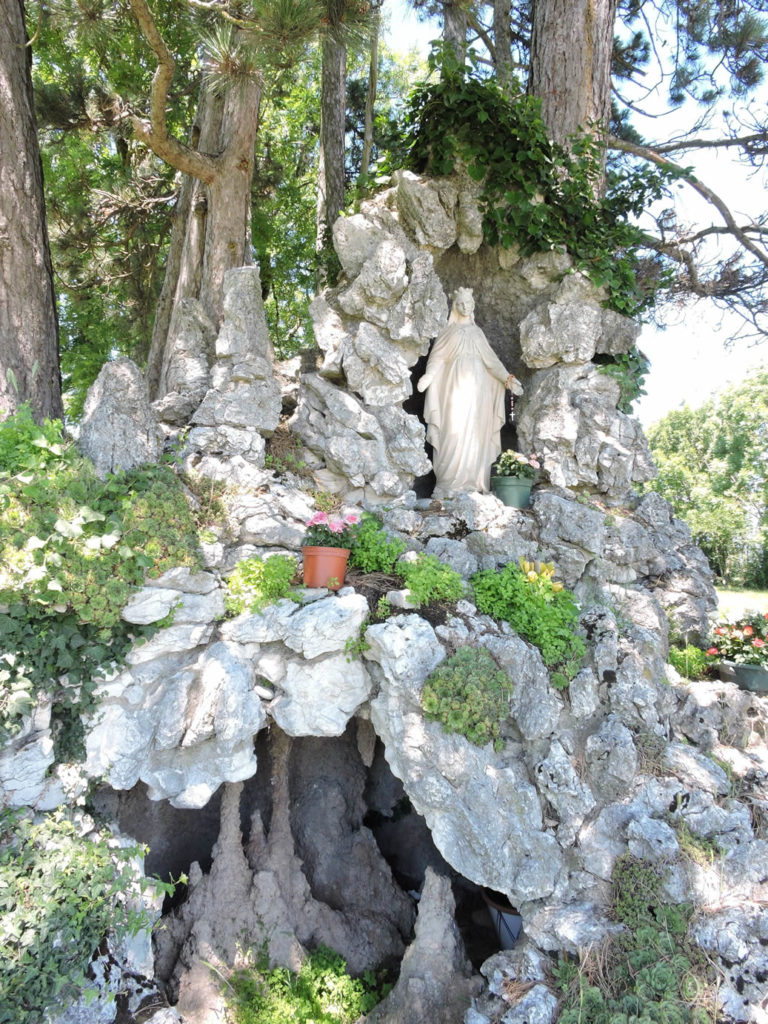 Section 5: Ups and down on the foothills of Vuache Mountain. 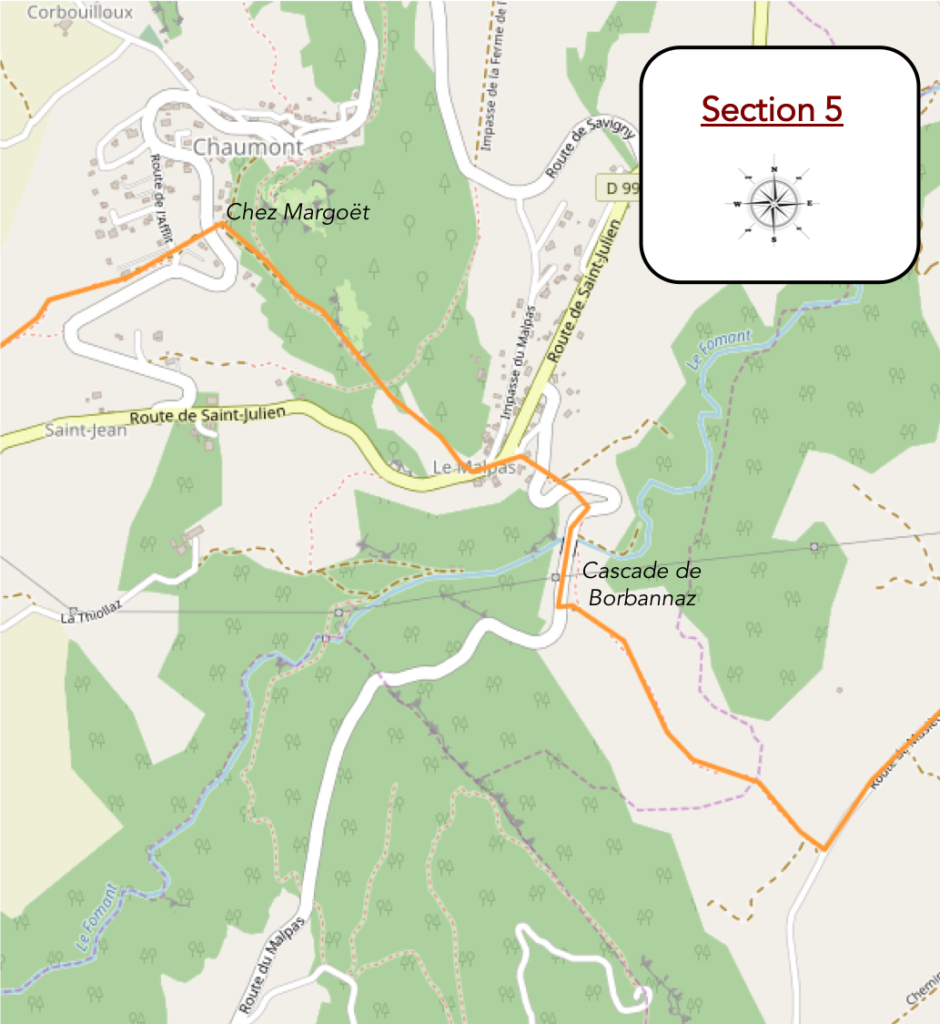 General overview of the difficulties of the route: rather tough course, with first the steep descent to the Borbonnaz waterfall then the climb to Chaumont, often with slopes well above 15%.

The piers of the bridge are worn and wet. From stone walls and spooky boulders the water streams, and close by opens the abyss, from which the levitating water droplets escape. 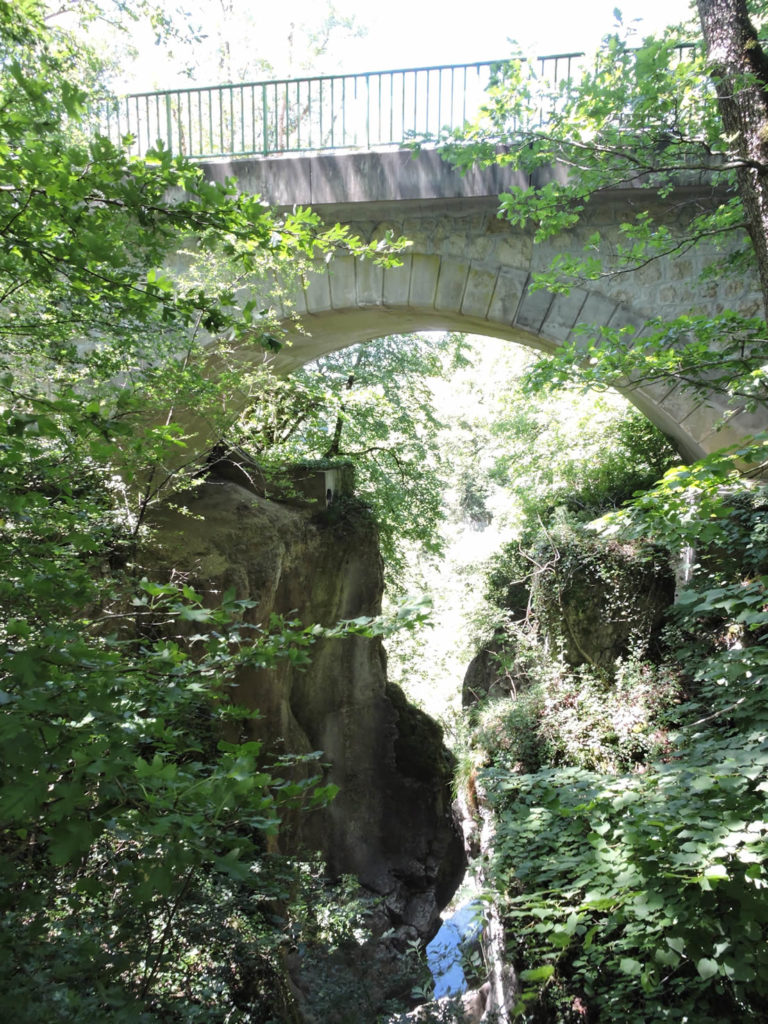 When you’ll find the signpost, you will no doubt breathe a sigh of satisfaction. 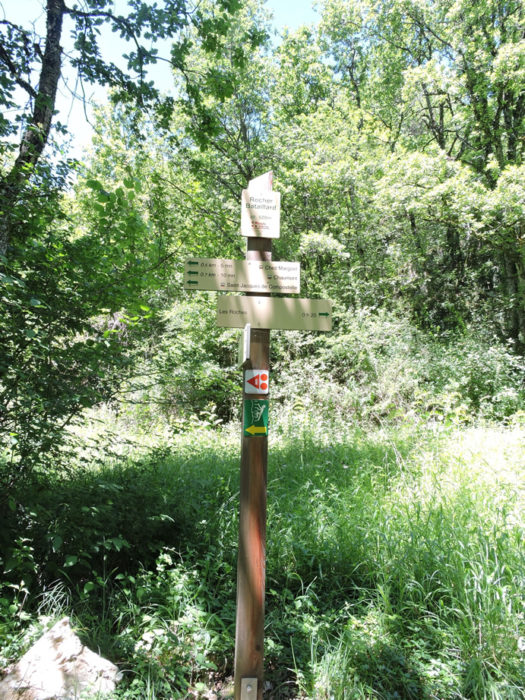 Here, the walking times offered are a bit crazy, probably times offered to experienced mountaineers. 35 minutes for the 2.9 km to Frangy. Few pilgrims ensure this performance. And again, 5 minutes to reach the village of Chaumont. It’s more than 10 minutes and it rises strrply… 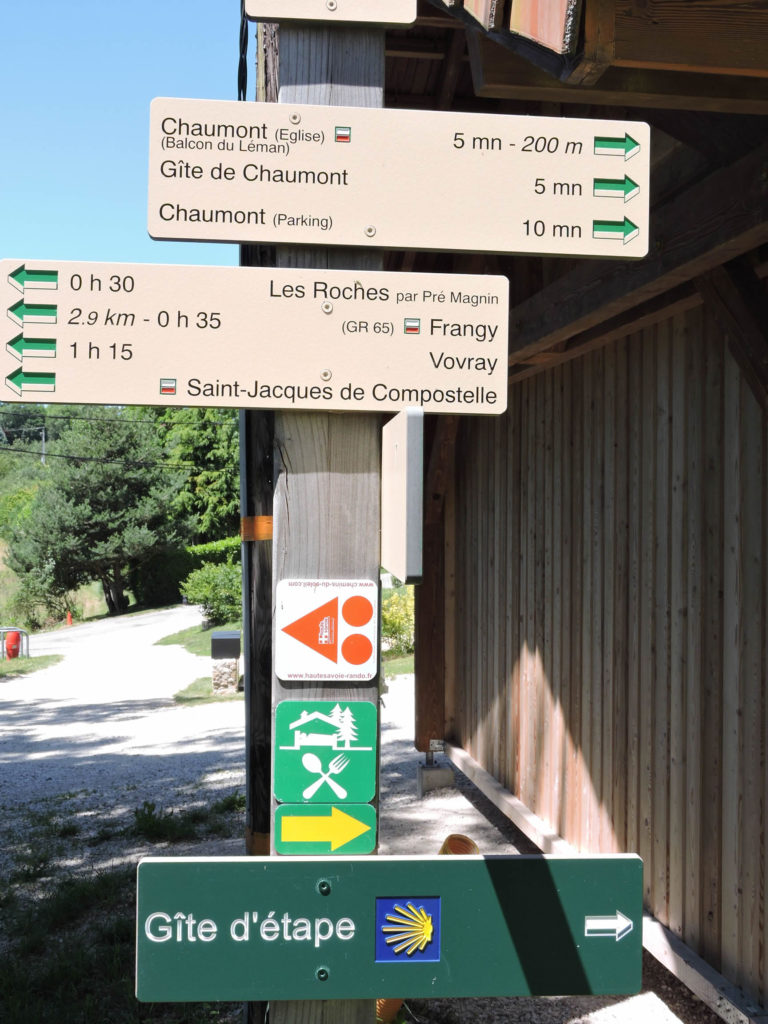 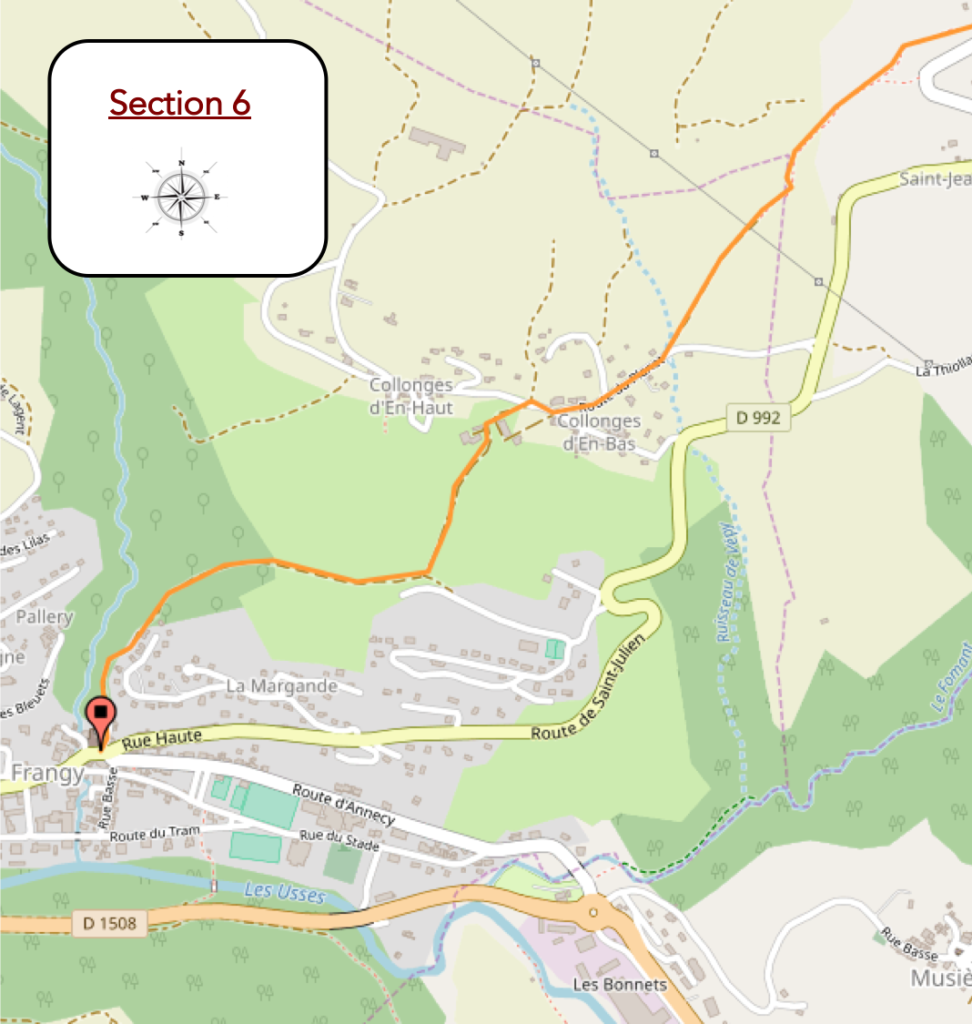 General overview of the difficulties of the route: sustained descent at the end of the stage (more than 200 meters of descent). 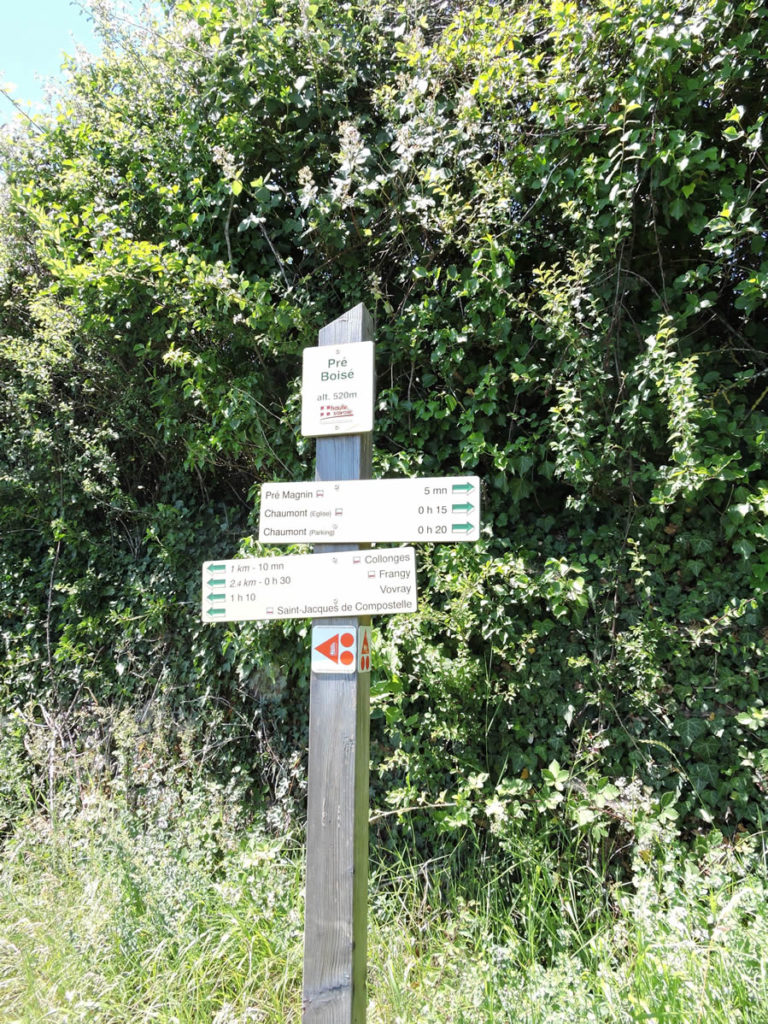