From Geneva to Vienne, in the Lyonnais, the first part of the Via Gebennensis is in fact only a long way to find the Rhône River. Sometimes, you brush against it, taking advantage of its soft and generous banks. Other times, you can only observe it from afar and from above the breathtaking meanders of the river which twists with pleasure in the plain. Still other times, you seem to lose it for real, only to join it much later. Today it’s a bit of all of these at the same time. The course runs in search of the river, on the hills of Haute Savoie and Savoie, between groves and countryside. The route finds the majestic river again in the plain when the latter mixes its waters with the torrential Fier River, which carries its fury into the gorges, coming from Annecy. The rest of the program is no more than a gentle and long stroll along the banks of the river.

Difficulty of the course: Slope variations (+402 meters /-489 meters) are low for a long stage (30 km). And again, here you’ll stop at Culoz a bit off the road, as many pilgrims walk as far as Chanaz, which lengthens the stage a little further. Others also stop in Seyssel, also off GR track, which shortens the stage. Depending on the choice you make, you will visit up to 3 departments: Haute-Savoie, Savoie and Ain.

The route climbs a bit to reach Champagne at the start of the stage. Then, it’s just a succession of light ups and downs, the slopes of which rarely exceed 10%. The slope becomes a bit more tough when GR path slopes down at the junction of Fier and Rhône Rivers. For the rest, in terms of effort, it’s vacation.

In this stage, you will walk as much on the pathways as on the roads: 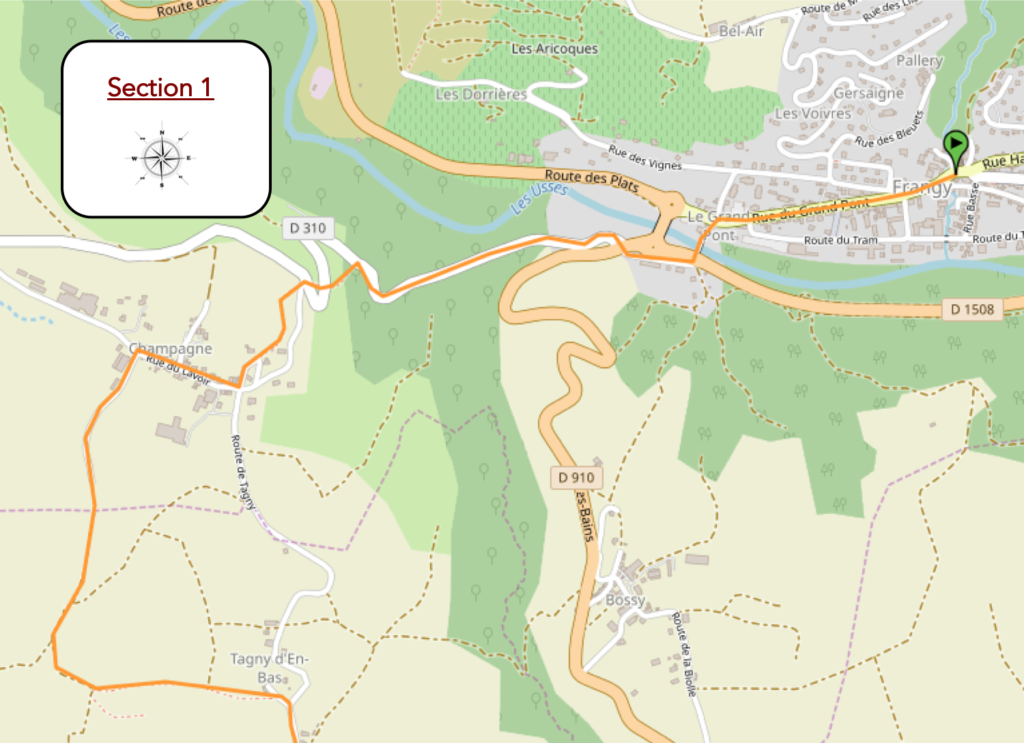 General overview of the difficulties of the route: a few steep slopes, but reasonable around Champagne. 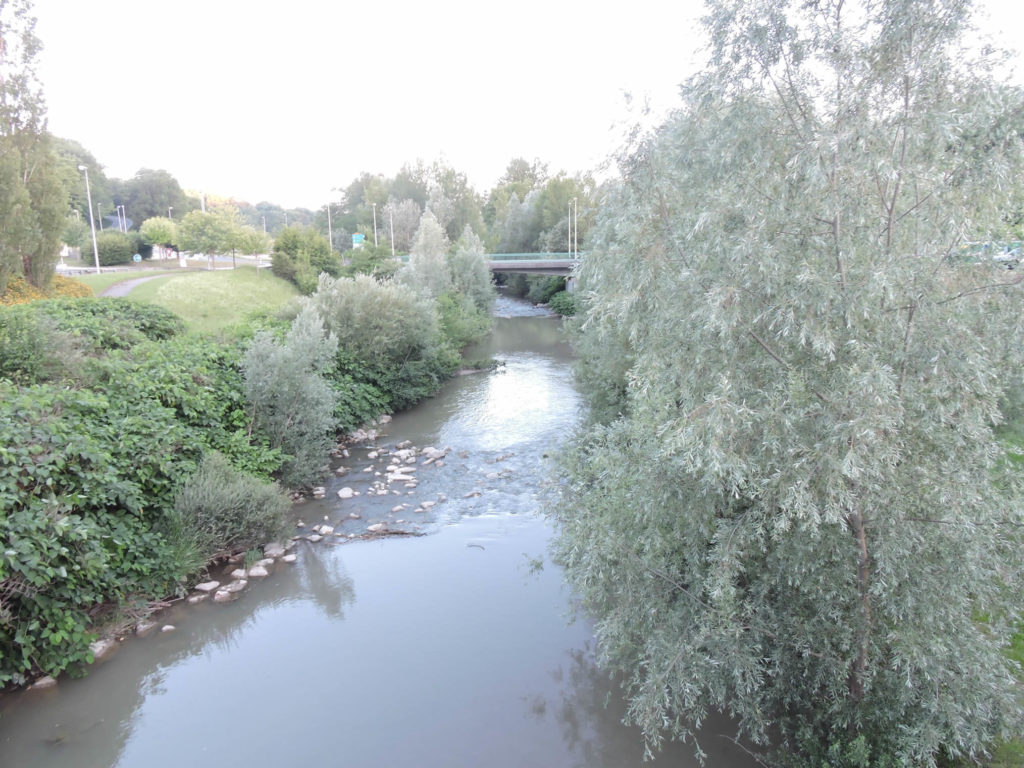 Section 2: Ups and downs between meadows, hamlets and undergrowth. 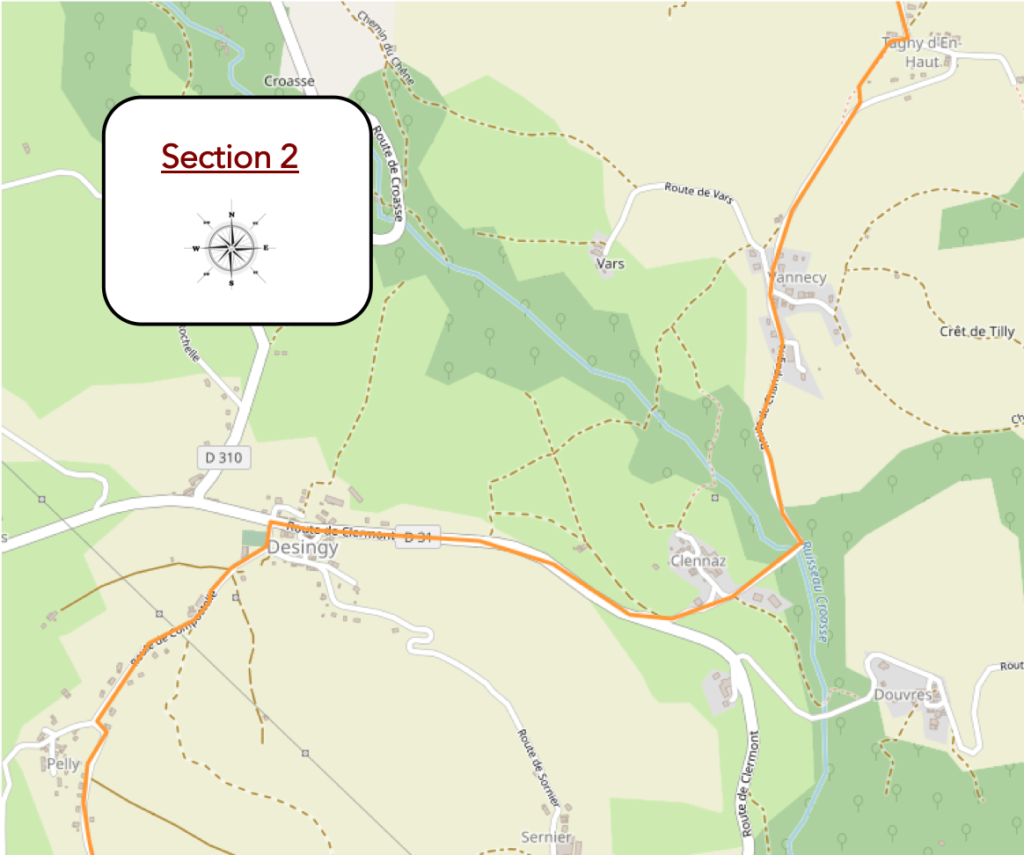 General overview of the difficulties of the route: ups and downs of little consequence.

Section 3: Below the Mountain of the Prince. 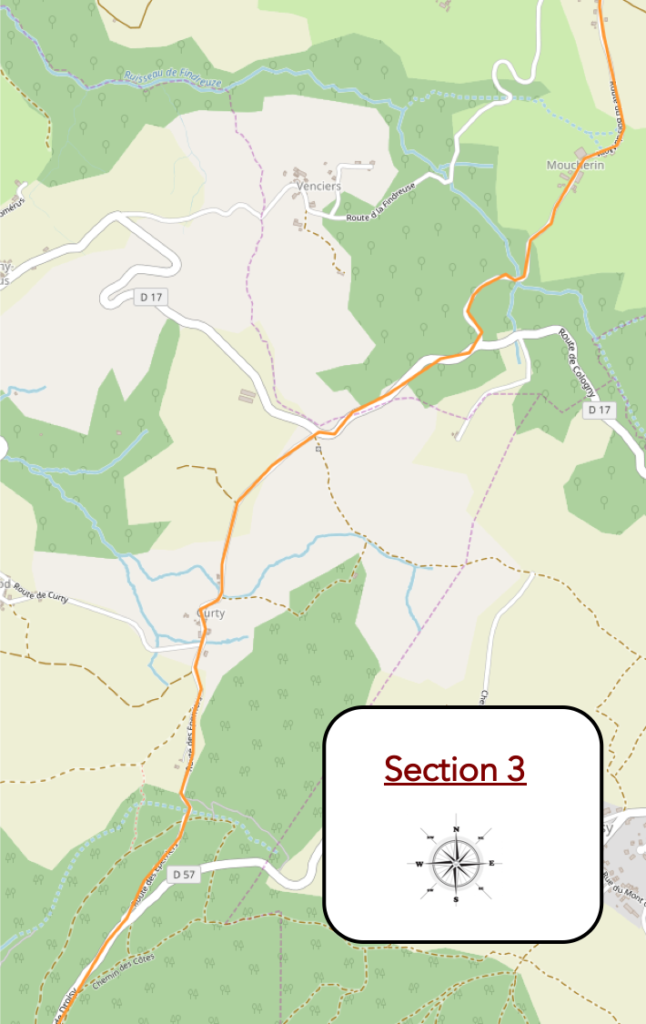 General overview of the difficulties of the route: ups and downs of little consequence.

Below Moucherin, you ‘ll see the Pelly Castle in the greenery, an old medieval fortified castle, completely restored, where even a romantic gîte is present. 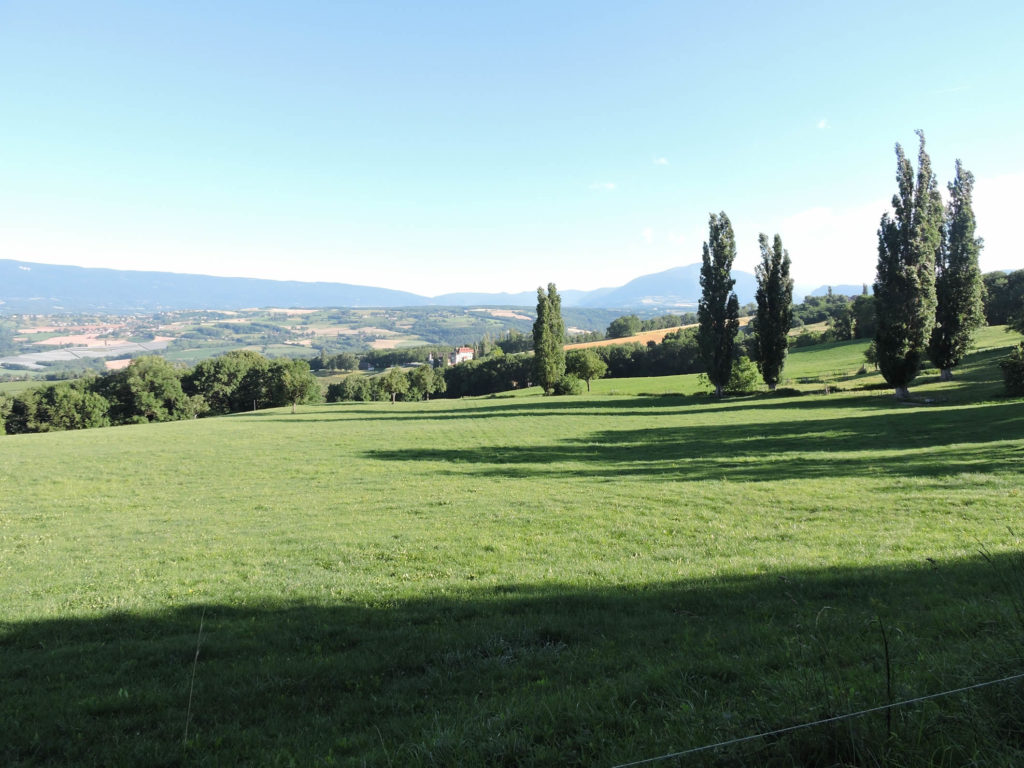 At the top of the climb, the road passes to a place known as Chez Cudet. Here a panel indicates many directions. Ours is the one that heads to Seyssel. But, above all, there is a sign that indicates the best means of protection against ticks, as the forest here is known to harbor these charming insects. Be careful though, Lyme disease is a nasty chronic disease, but not all ticks carry Borrelia. Far from it! 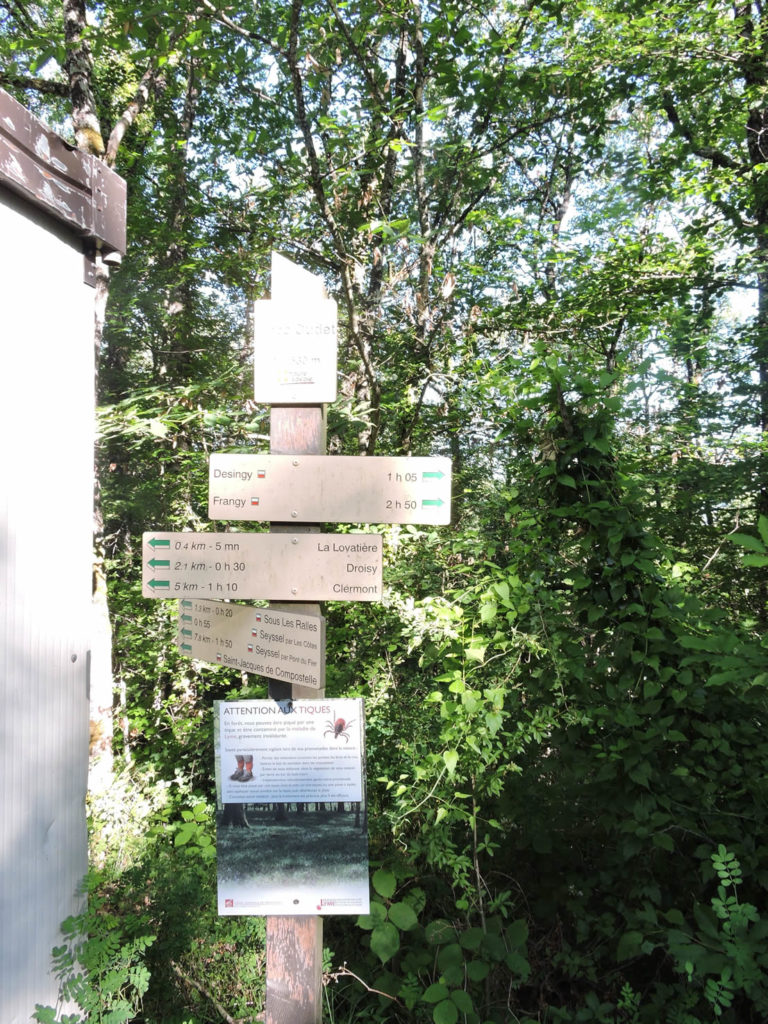 Section 4: Step to step to reach the Rhône River. 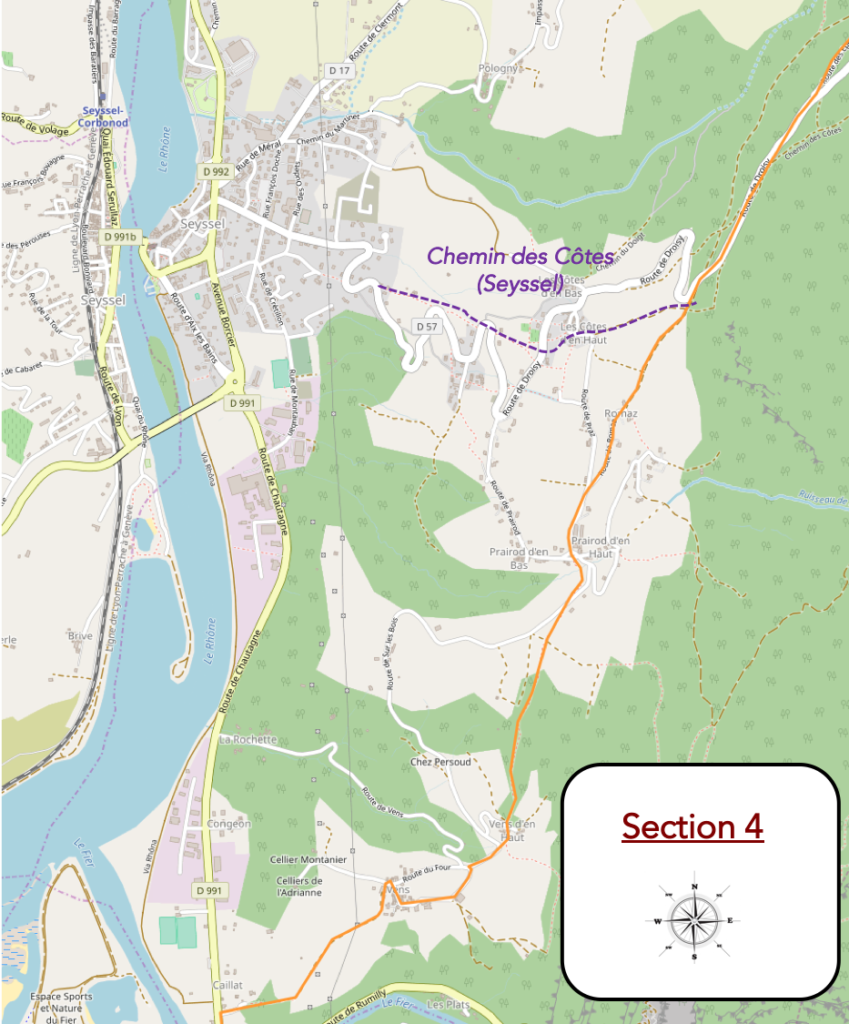 General overview of the difficulties of the route: in constant descent, sometimes with very sloping passages.

Yet, it continues on the dirt road to reach the place called Sous Les Ralles. This is where a variant leaves for Seyssel, via the Chemin des Côtes. Many pilgrims, who do not like to travel very many kilometers, go to Seyssel. For others, the bridge over Fier River is an hour and 20 minutes’ walk away. 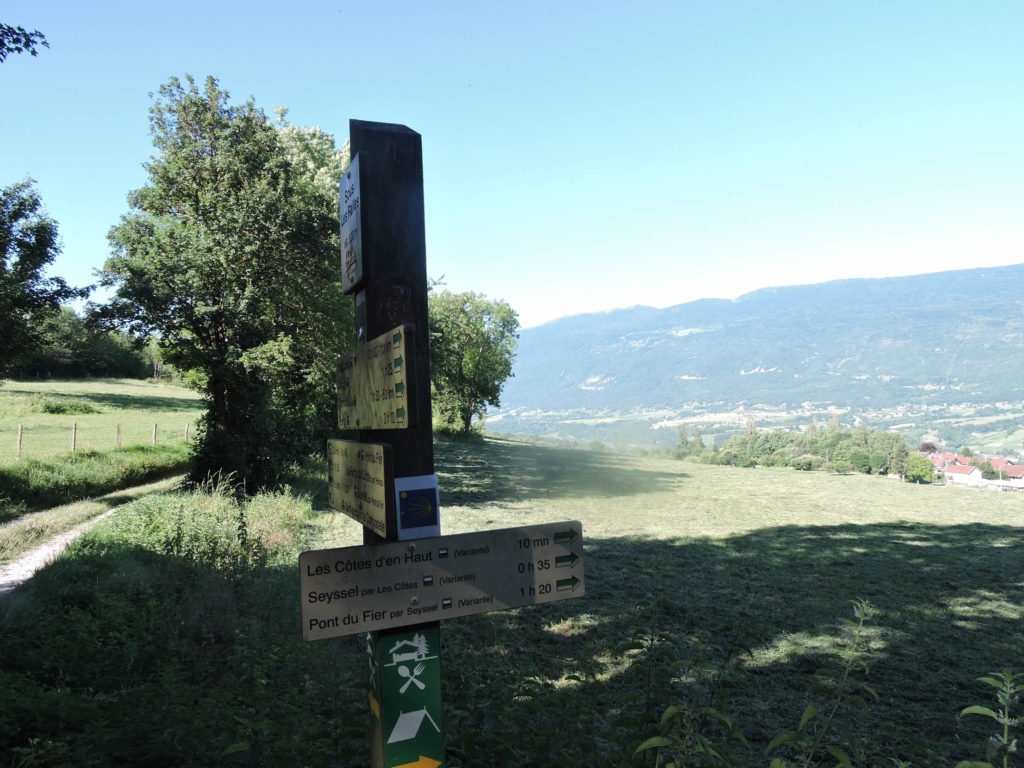 At the bottom, you’ll see the Rhône River for the first time from Geneva, in the vicinity of Seyssel. The river likes to make long turns in the valley, having carved out often different rocks, accentuating the meanders, with the disappearance of the Quaternary Era glaciers. 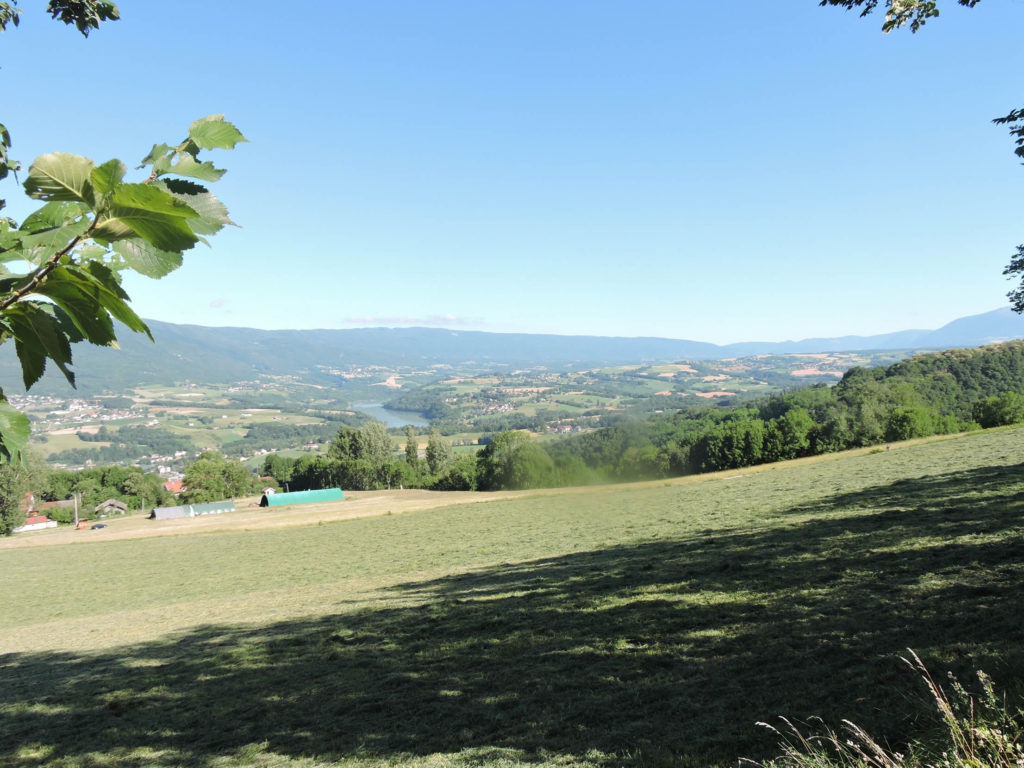 Here you are 1.4 km to the Fier Bridge. GR path joins the paved road that heads to Vens. Be careful here, don’t take the wrong track! Follow the road, as another pathway climbs steeply into the magnificent cliffs and gorges overlooking Fier River in Mountain of the Prince. 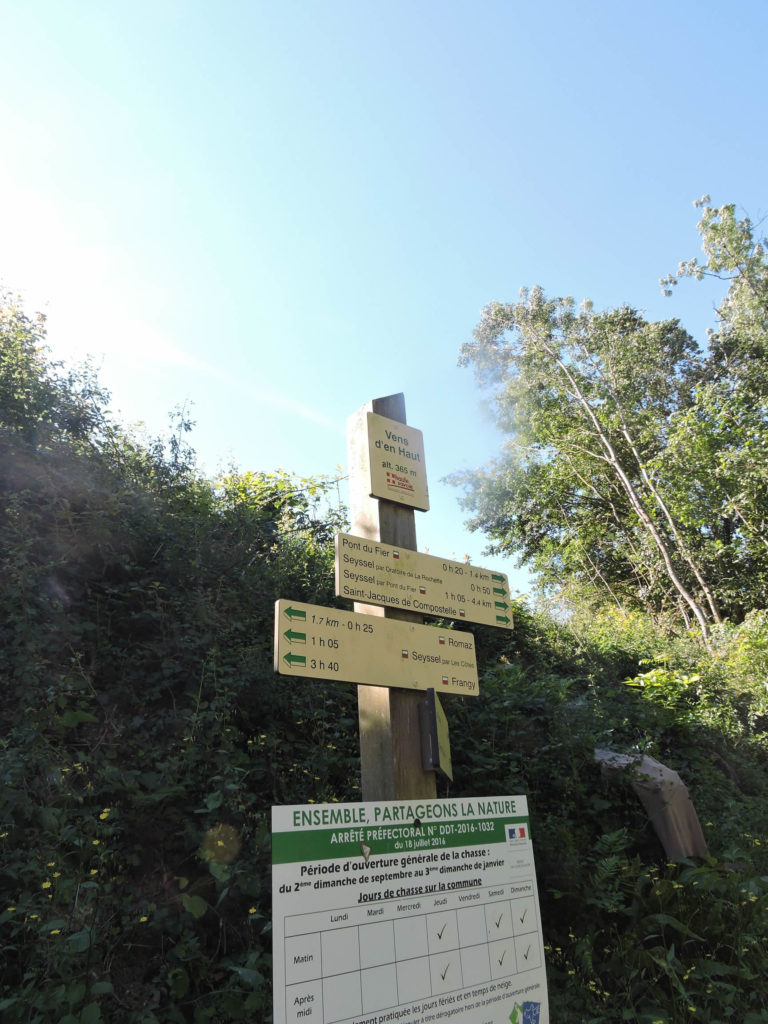 Section 5: Walk along the Rhône River. 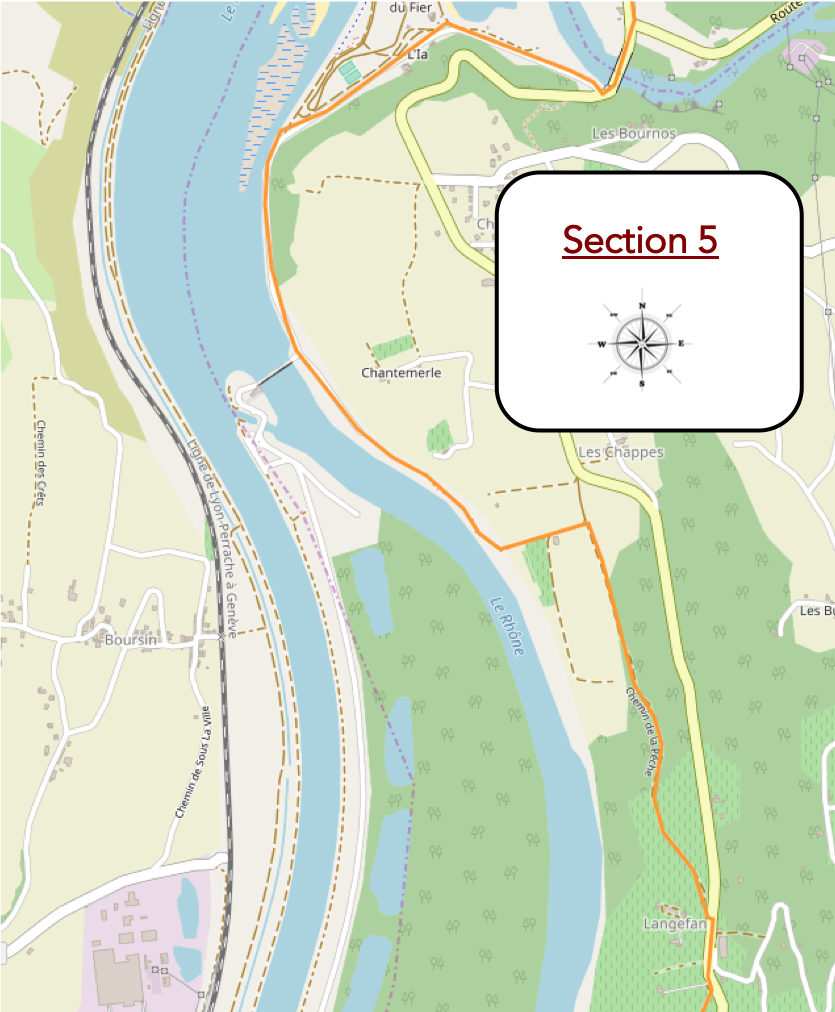 On the mountain side, Fier River is even wilder, more terrific. 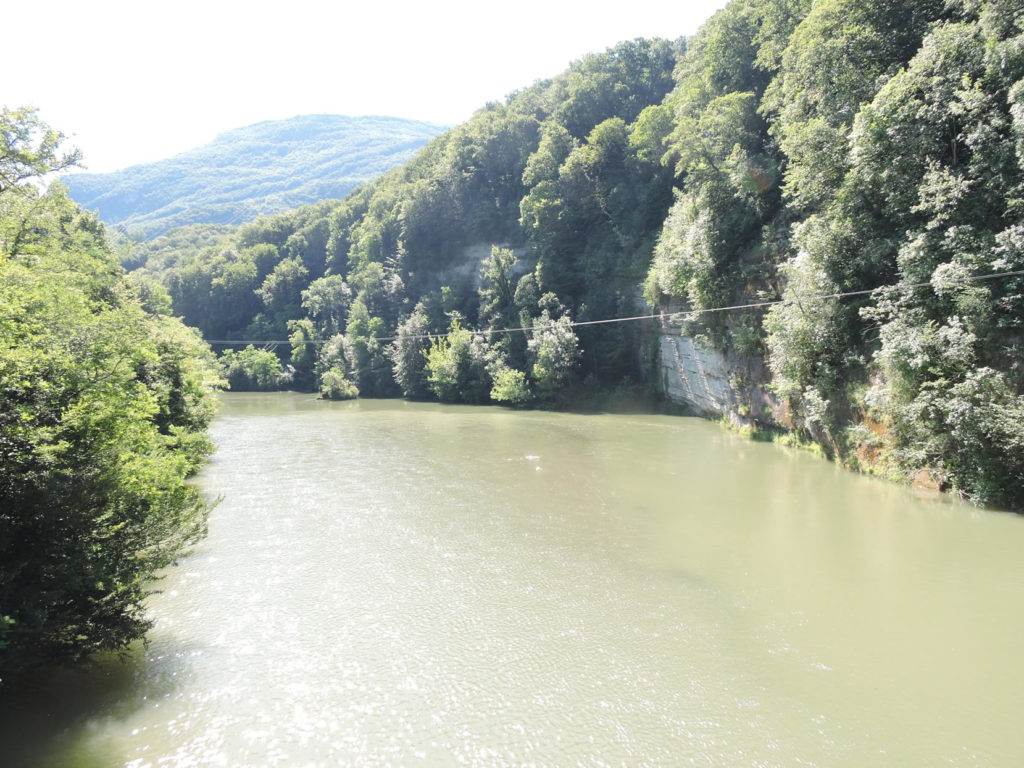 Section 6: In the gloomy plain of the Rhône River. 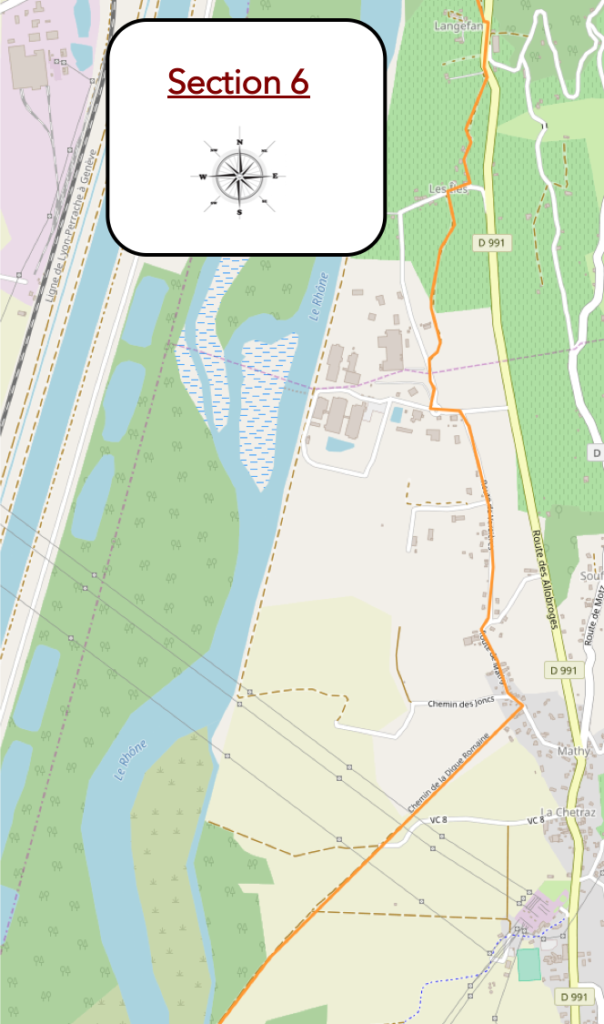 Here, you can choose a variant that heads to Serrières-en-Chautagne, if you want to stay or eat there. 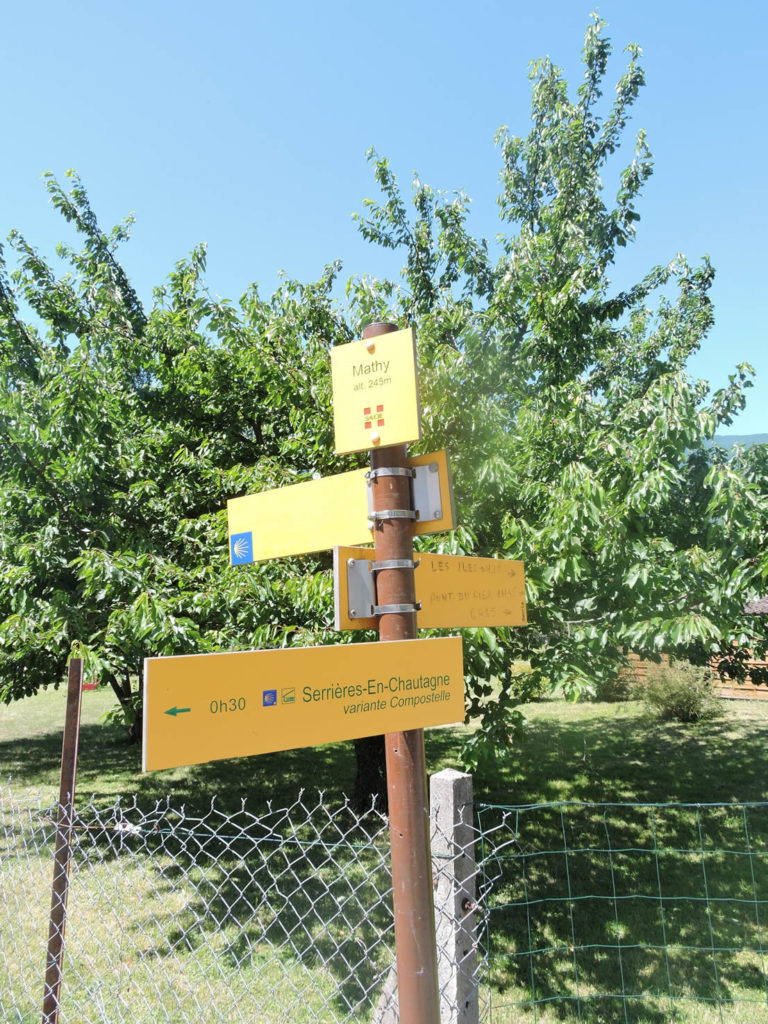 Section 7: Return to the banks of the Rhône River. 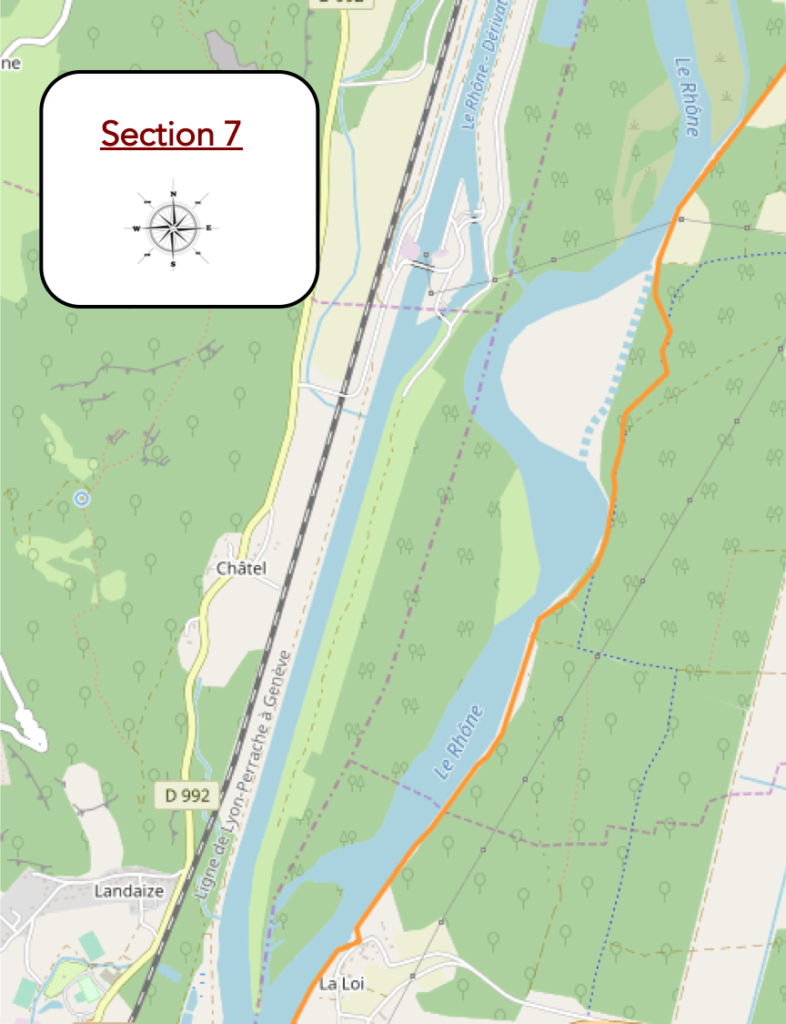 Further afield, the cycle track deviates a bit from the river to come back soon. Here, you are near the Malourdie Islands and there are many canoeists on weekends in good weather. They, at least, have plenty of time to admire the river. In this region there are very few conifers. Poplar groves hold an important place there, in the middle of oaks, especially pedunculate, but also ash trees, beeches, hornbeams, large maples, rare lime trees. On the banks of large alders and locust trees hold the ground, to avoid the floods of the river. 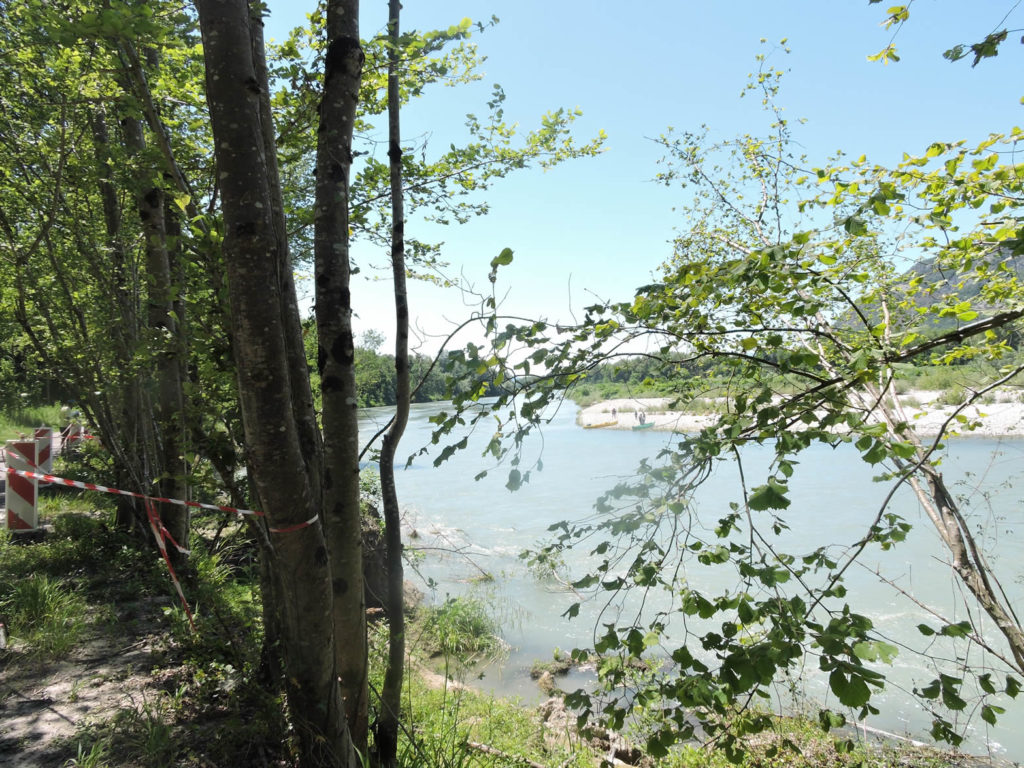 In the hardwoods, it soon arrives at a locality called Les Borsières, 40 minutes to the Pont de la Loi. 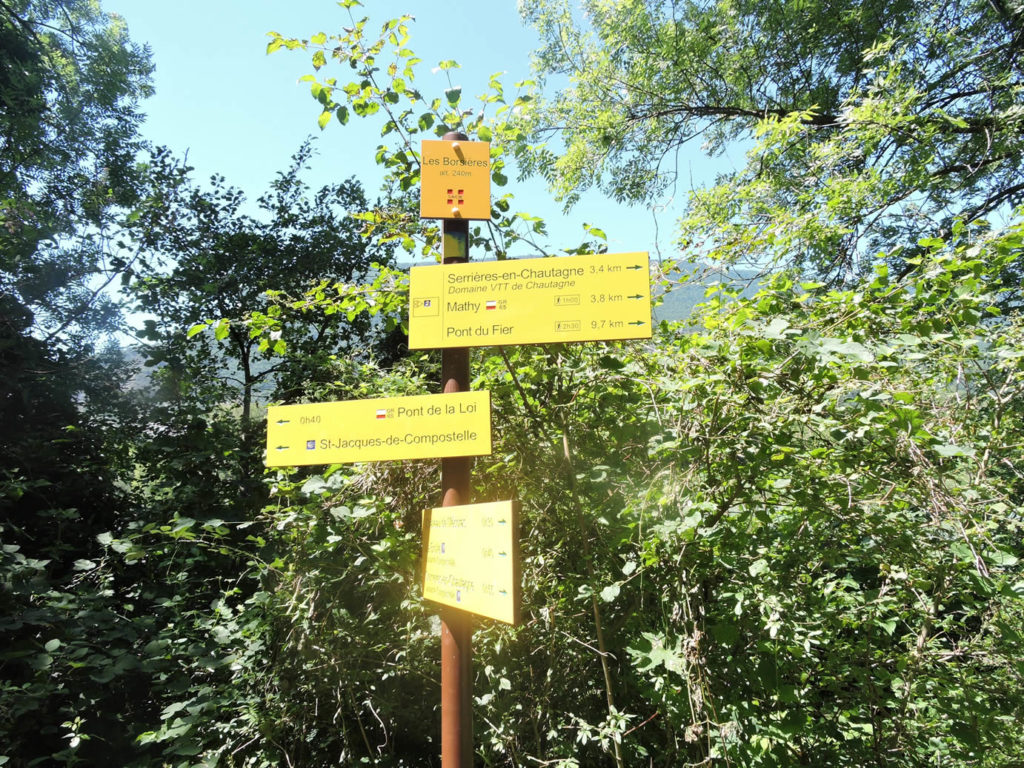 You follow the river, but, as we said above, you don’t see it often. Signs also encourage people not to approach the banks. Under the branches of the ash trees, you can see the mountain of Grand Colombier above Culoz. 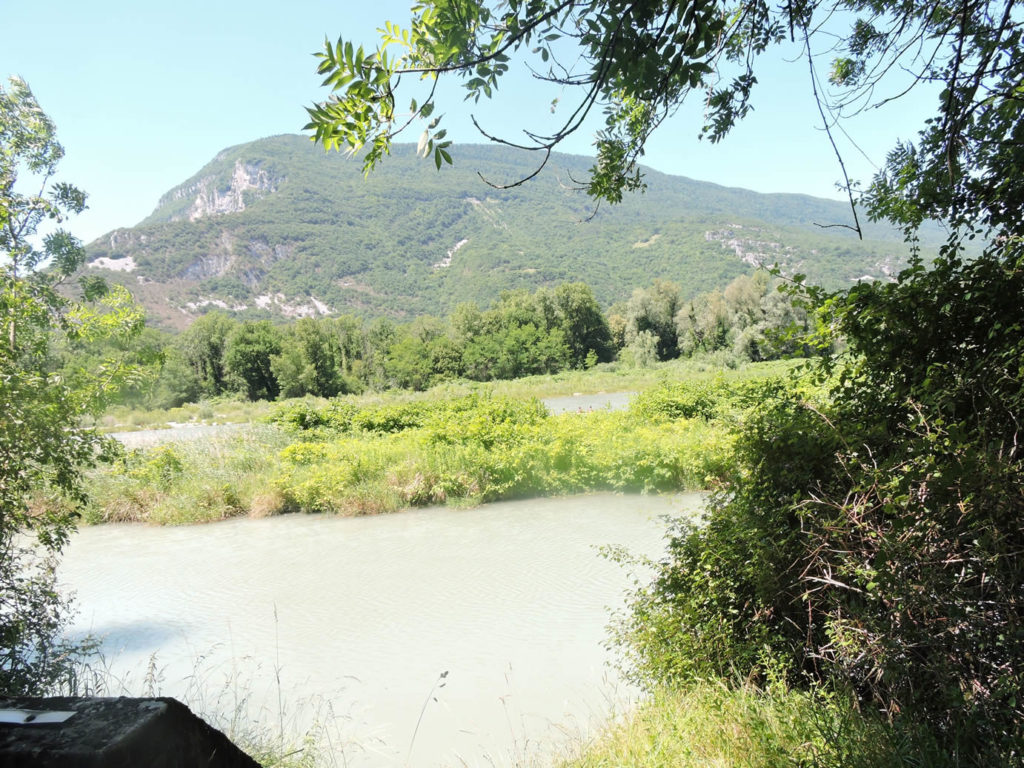 Section 8: A stopover in Culoz. 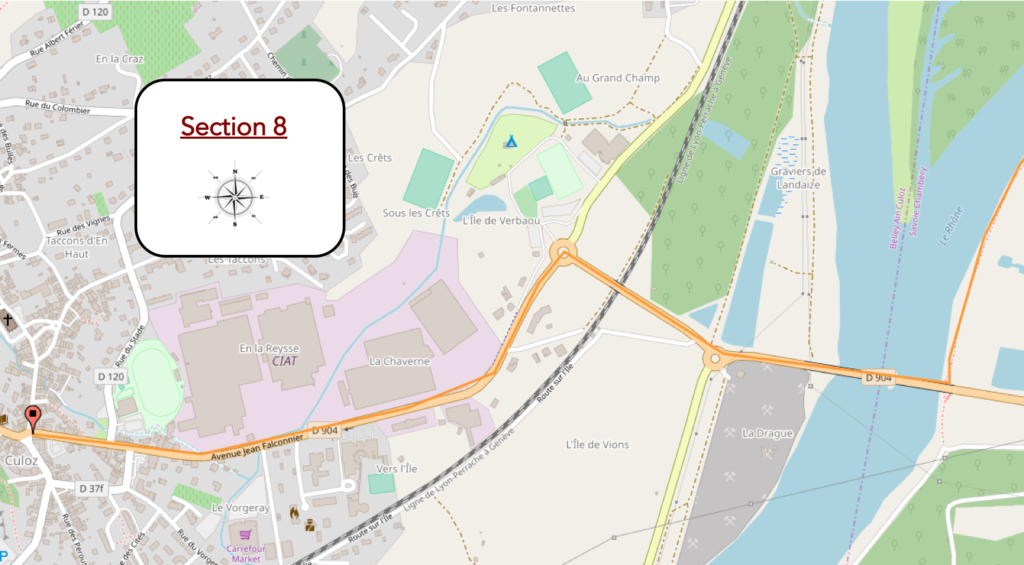 GR path continues along the river towards Chanaz. But, it’s 1 hour 40 minutes from here. So, a good solution is to leave GR65 path to take GR9 path which leads to Culoz, just across the bridge. The city, located under the mountain of Grand Colombier, is a strategic station on the TGV Lyon-Geneva line. 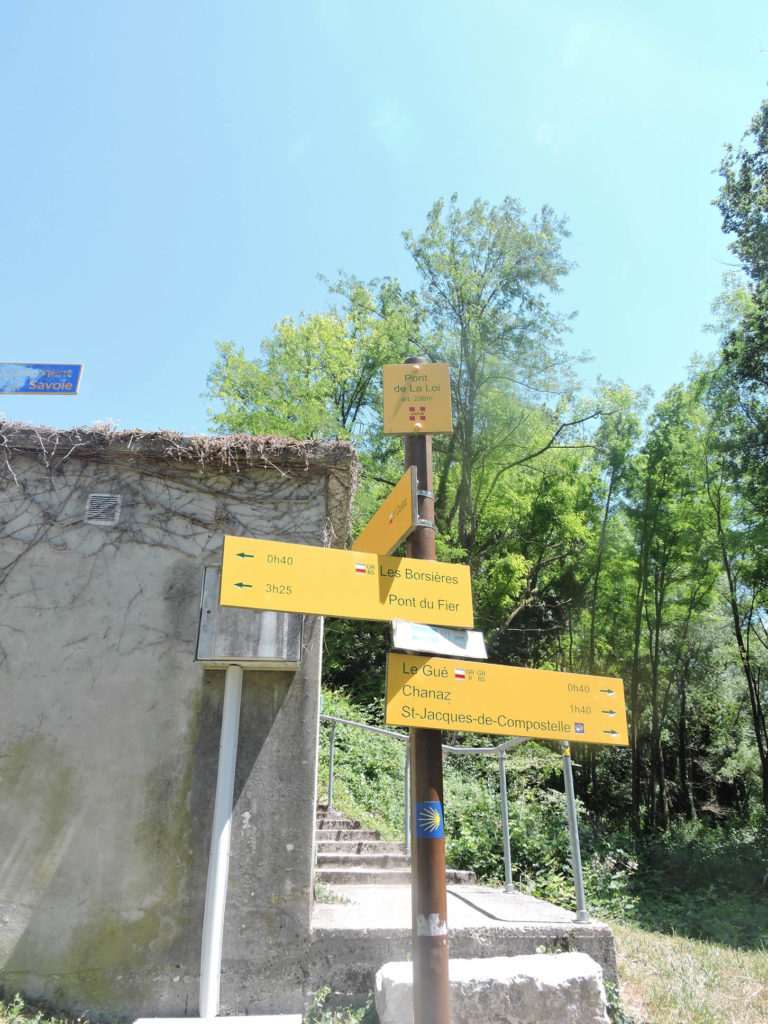