Between Rhône and the beautiful vineyards of Savoie

Pilgrims use the Camino de Santiago throughout the year, some even in winter. Each season has its particular charm. So, let’s now take a few steps in the fall, when the morning fog sometimes envelops the plain, when the light is autumnal or when the paths are strewn with leaves or chestnut hulls.

Today’s stage begins with a long walk along the Rhône River, sometimes in the moor to reach Chanaz, a charming village, also known as the Little Venice of Savoy, because it is from here that the beautiful canal of Savières starts towards Lake Bourget. It will then be a long transition under the side of the mountain to reach the heart of the beautiful vineyards of Savoie, where grape varieties grow unknown to many wine lovers, including Altesse, Marchestel or Mondeuse, but which are not lacking no originality and flavor. Autumn is also an extraordinary season to spend in the vines, when the colors turn gold. You will always have in front of you on the horizon the jaws of the Dent du Chat, overlooking the Lac du Bourget on the other side of the mountain. Here is a strange story. In the past, a fisherman made a living from his fishing on the shores of Lac du Bourget. One day, no fish came to bite his line. The unfortunate man implored the sky and swore to put back in the water the first fish caught by way of thanks. The miracle took place. But the fish was so big that the fisherman forgot his promise, and did not put the fish back in the water. He did the same for the second fish. At the third fish, it was a black cat that he found at the end of his line. Unfortunately, you will not see Lac du Bourget on the other side of the mountain, and you will end the stage in Yenne, along the Rhône, in a cul-de-sac, under the Dent du Chat.

Difficulty of the course: Slope variations (+433 meters /-441 meters) are very reasonable. The course flattens flat until Chanaz and the climb to the vineyards is not difficult, except for a steep, but short embankment, at the exit of Chanaz. The slopes are quite steep in the vineyard, both downhill and uphill, but hardly exceed the 15% incline, except during the steep climb to Jongieux-le-Haut. In fact, the most strenuous part of the stage is the dizzying and demanding descent from the hill of St Romain on the Rhône plain at the end of the stage.

In this stage, the passages on pathways are a little more numerous than those on road, but not by much:

Section 1: On the cycle path, near the Rhône River. 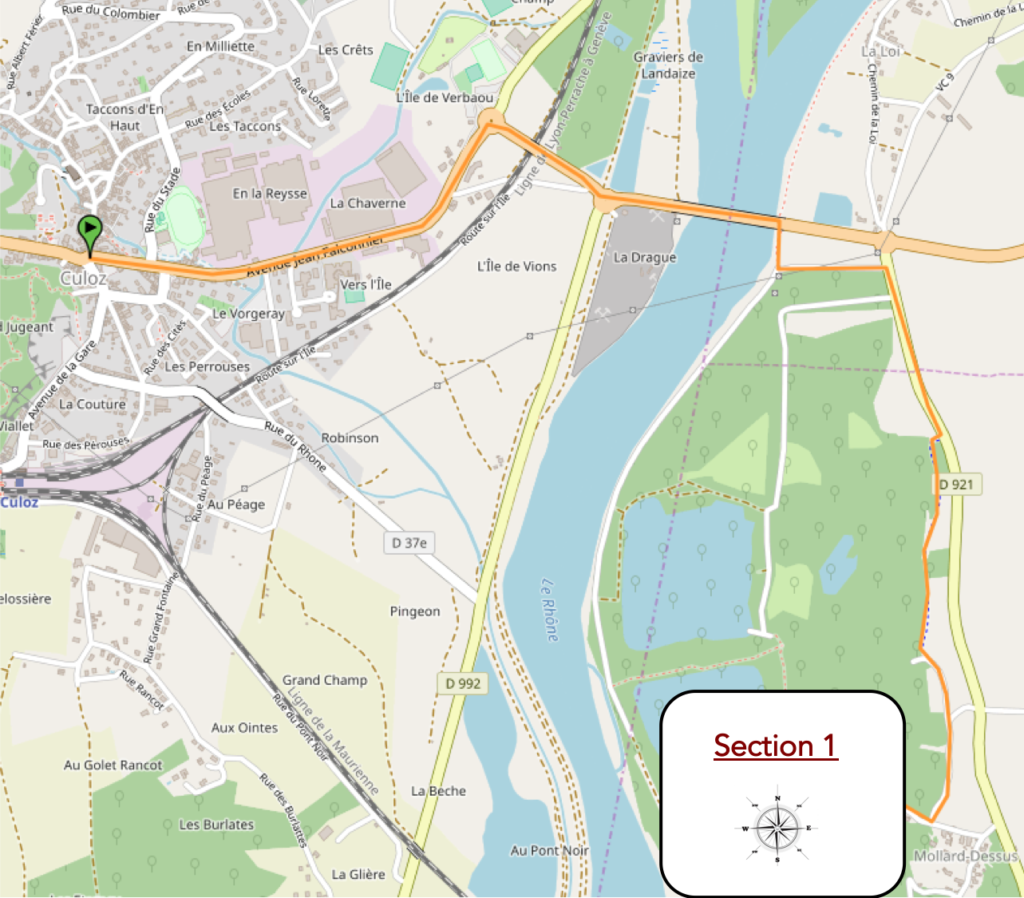 Section 2: In the moor, on the banks of the Rhône River. 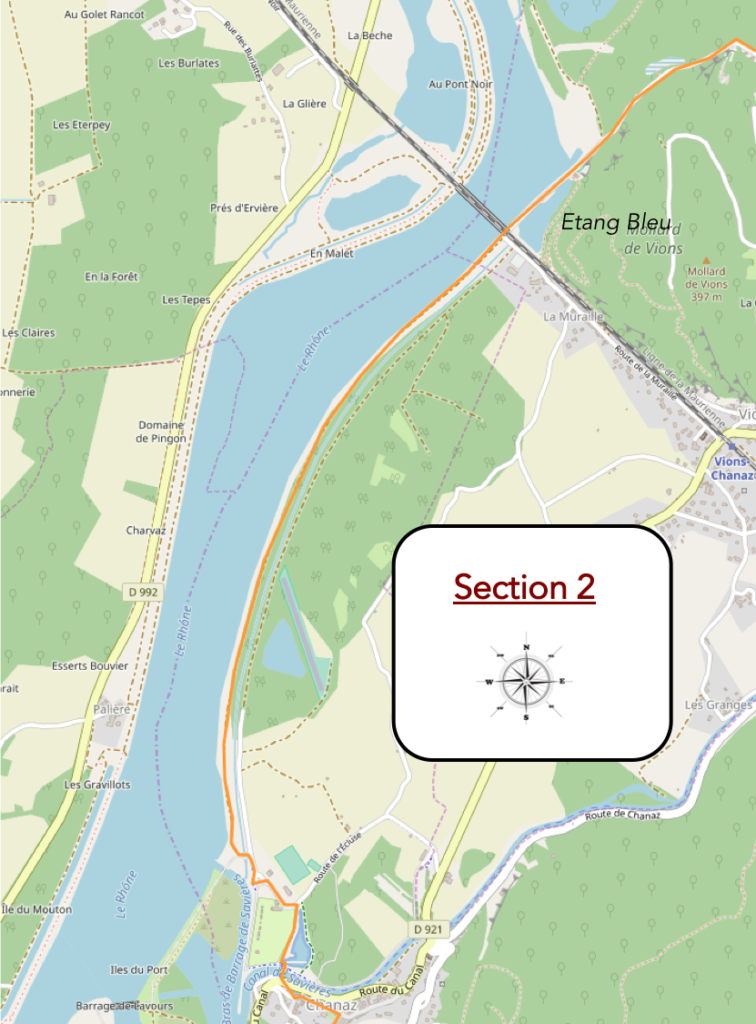 This is where the Lyon-Geneva railway line crosses the Rhône River. 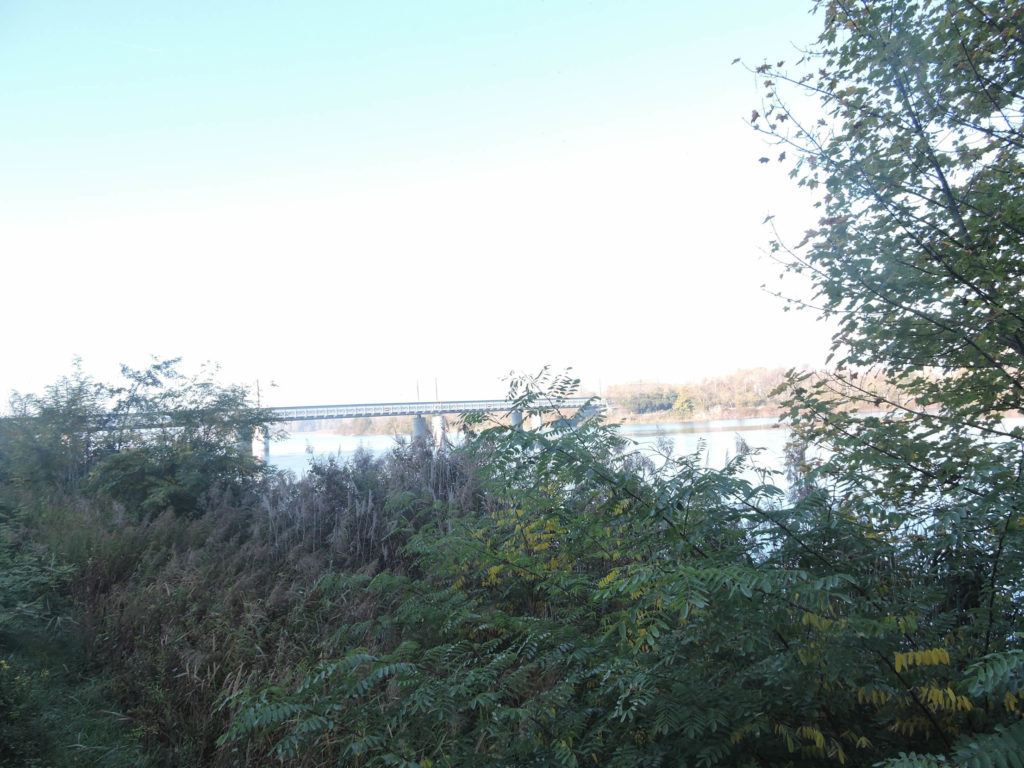 It is also here that GR path finally begins on the bank of the river, on a fairly rocky pathway, in a sort of grandiose steppe for nearly 3 kilometers. 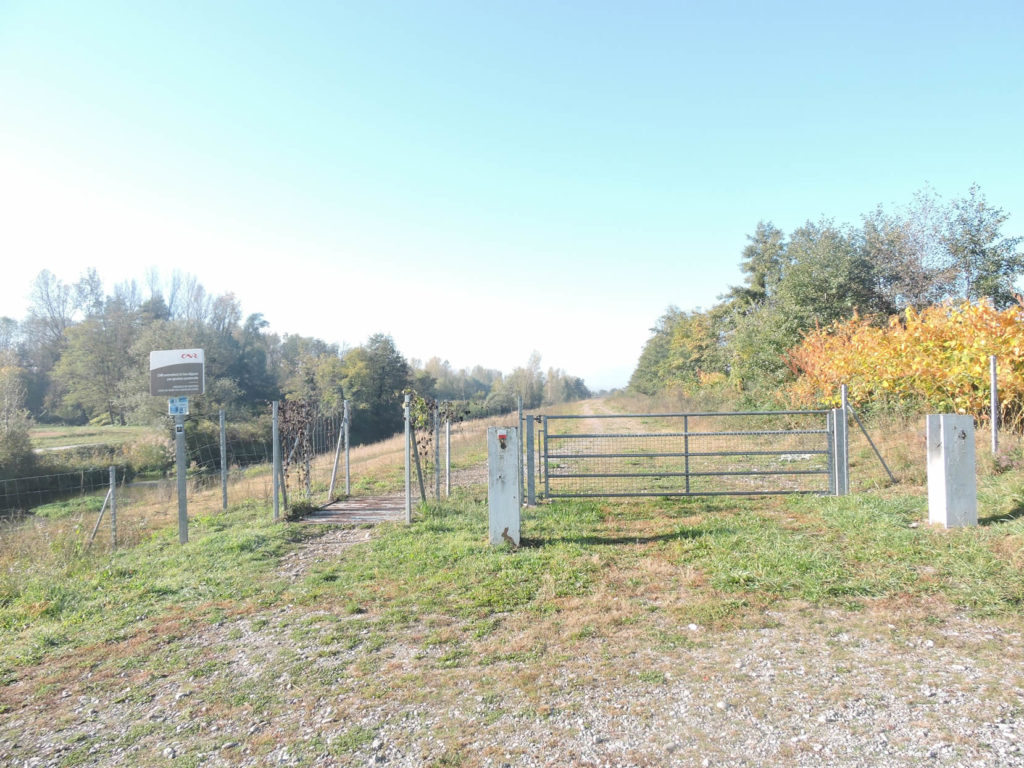 It is a moment of grace and fullness in this incredible universe, out of the world. 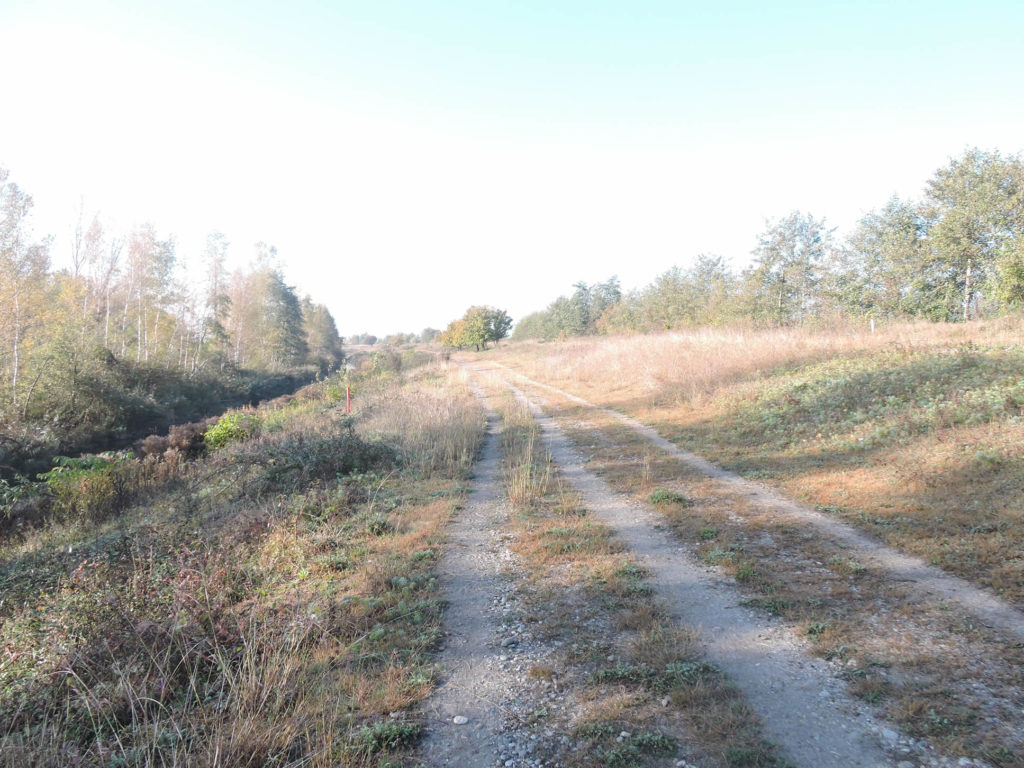 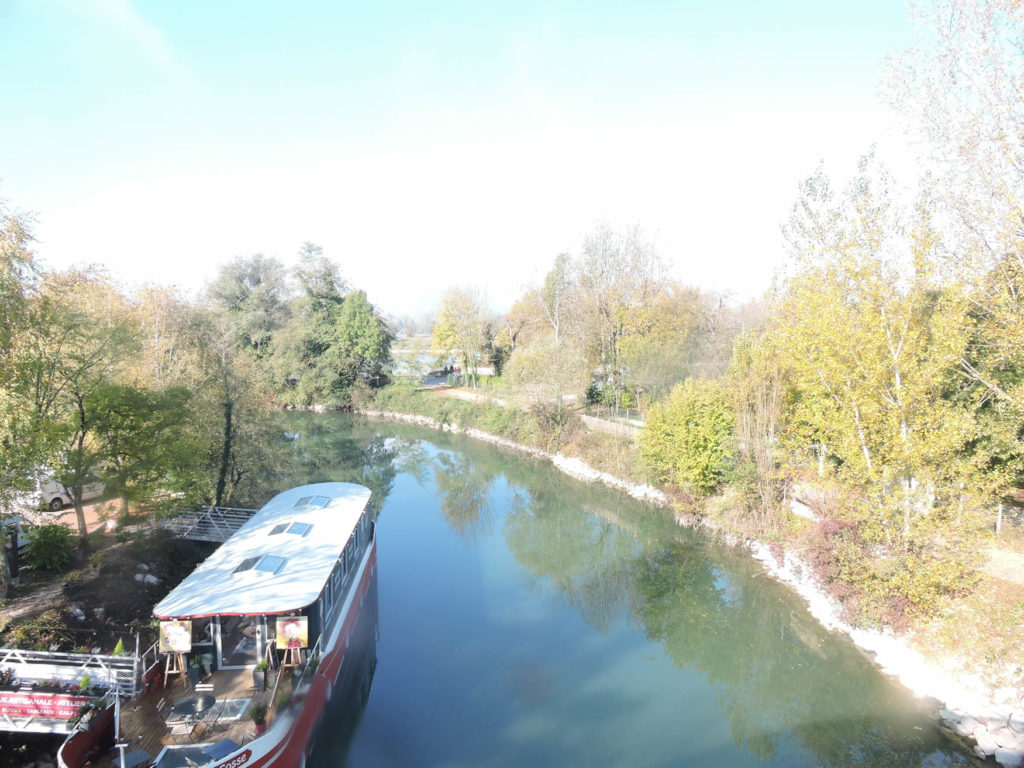 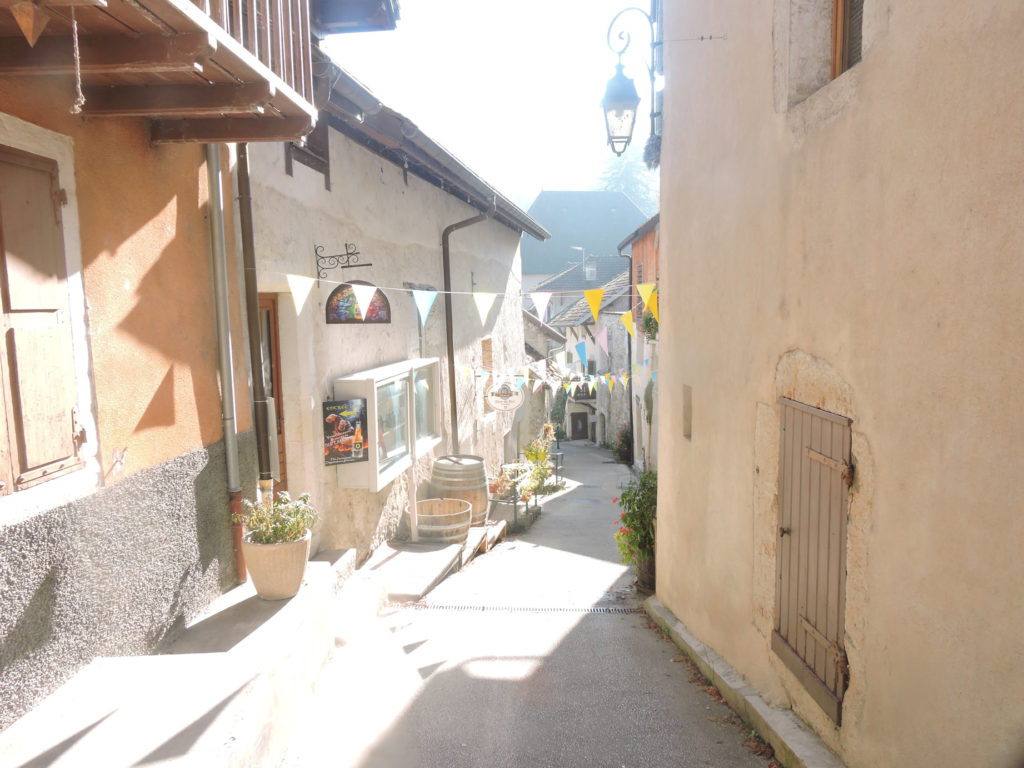 Section 3: On the way to the vineyards of Savoy. 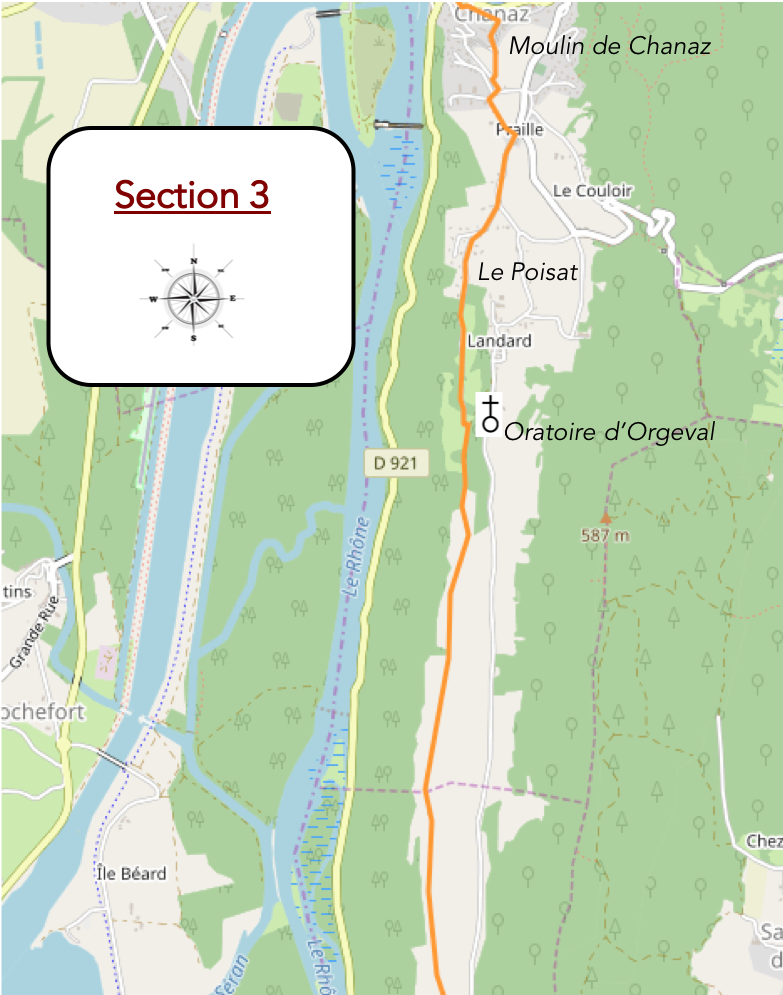 General overview of the difficulties of the route: successions of ups and downs, with fairly reasonable slopes, not exceeding 15%, except at the start where it is even steeper. But, some would say that 15% slope is not negligible. With reason.

Turning around, you have plenty of time to admire the Grand Colombier, above Culoz. This mountain is often the delight of Tour de France cyclists, but also of amateur cycle tourists. 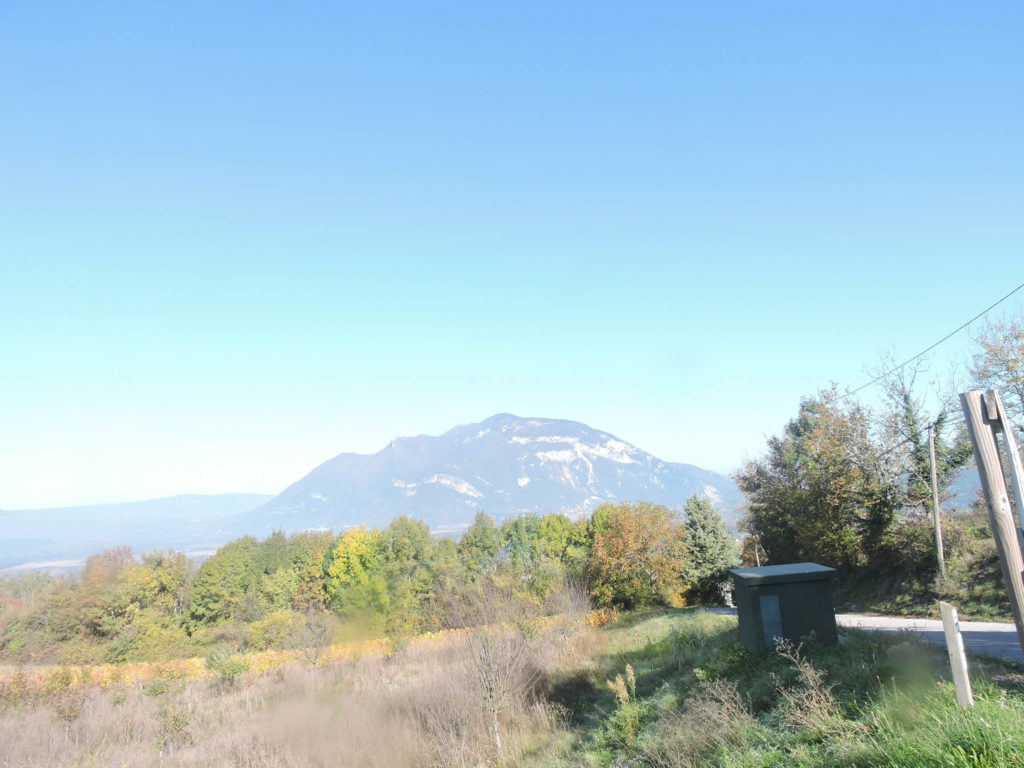 Section 4: In the first vineyards of Savoy. 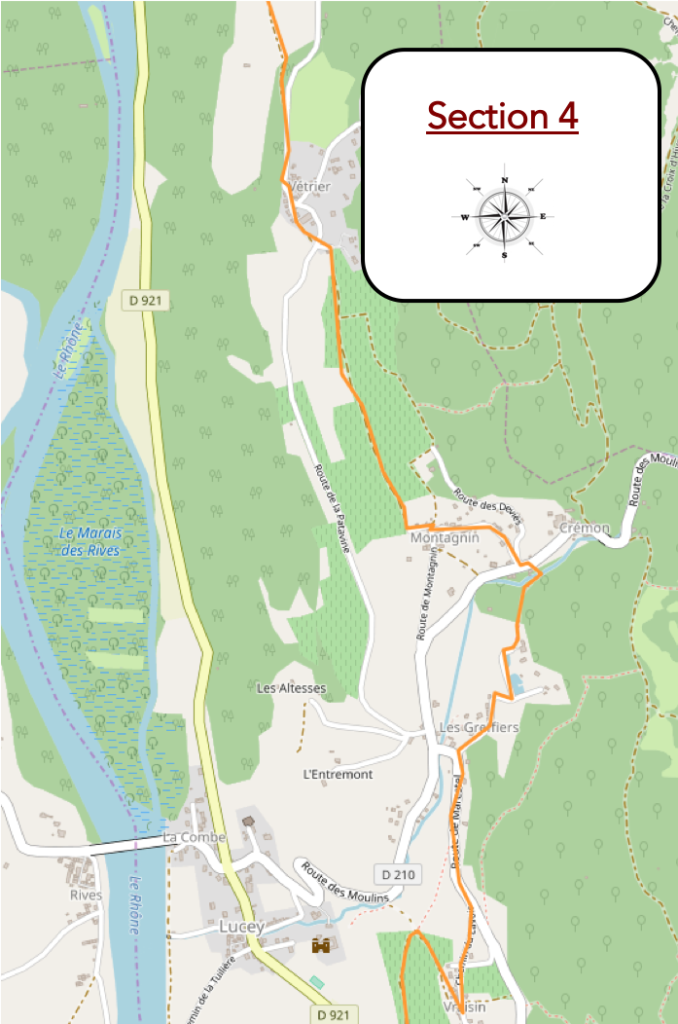 General overview of the difficulties of the route: the descent above all, most often reasonable. 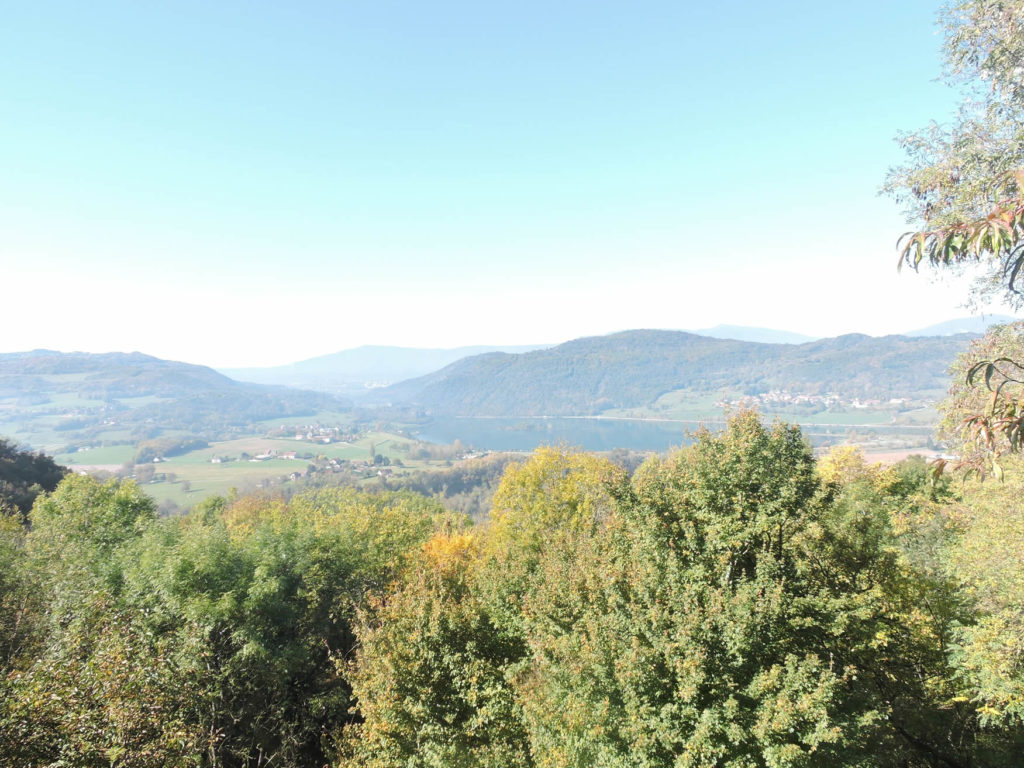 If you look closely at the vines after the harvest, you will see that the dried bunches remain attached to the vines. This is where winegowers have to make great use of the harvesting machines. This type of machine performs all operations in a single operation. It straddles the row of vines with its gathering and shaking arms, and drops the grains into buckets. A vacuum cleaner blows the crop to remove leaves and branches that have fallen during shaking. Warning! Not all PDO grape varieties allow this kind of approach. For some, the bunch must be brought intact to the press. On the other hand, they need vineyards developed to allow access for machines. 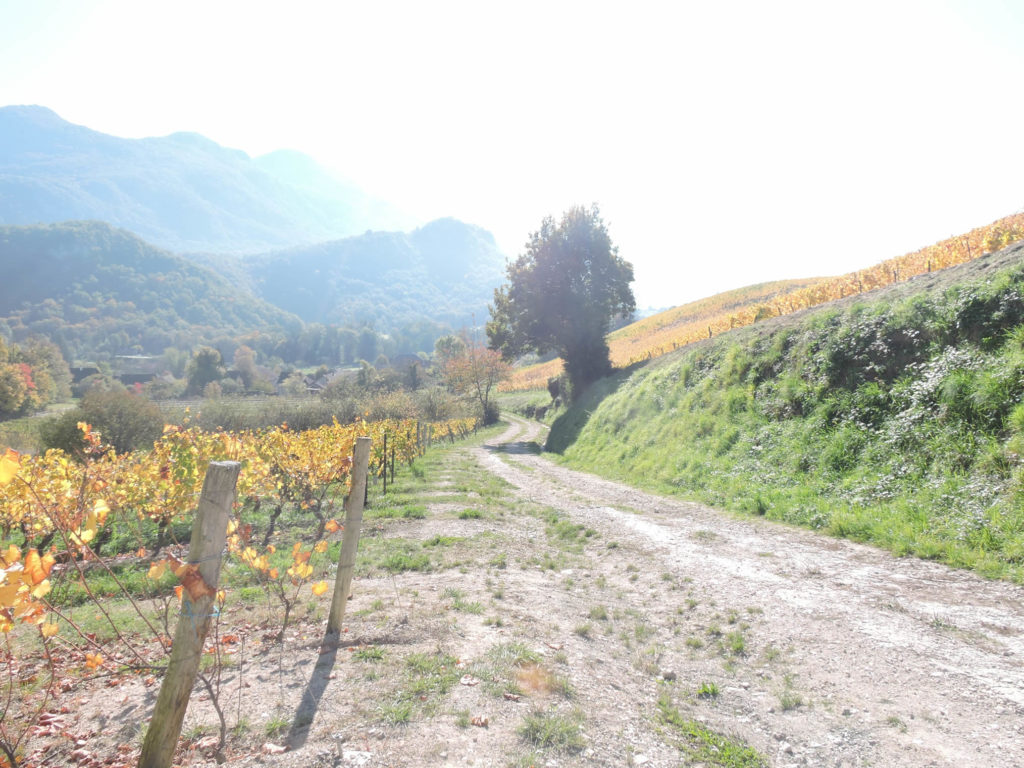 Section 5: From the vineyards to the St Romain chapel. 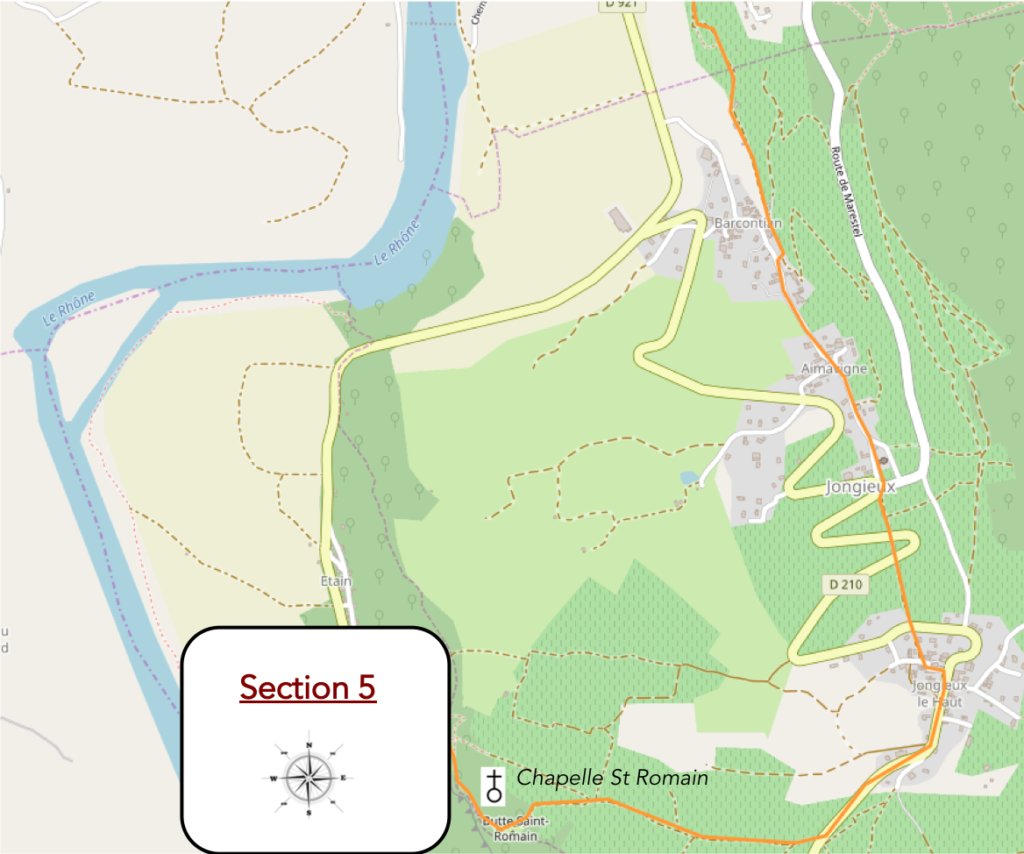 General overview of the difficulties of the route: on the course, there is the climb to Jongieux-le-Haut in the vineyards, where the slope grazes and exceeds 15%.

Turning around, you have an extensive view of the route traveled in this magnificent vineyard clinging to the slope, with the Grand Colonbier mountain still in the background, under which you set out this morning. 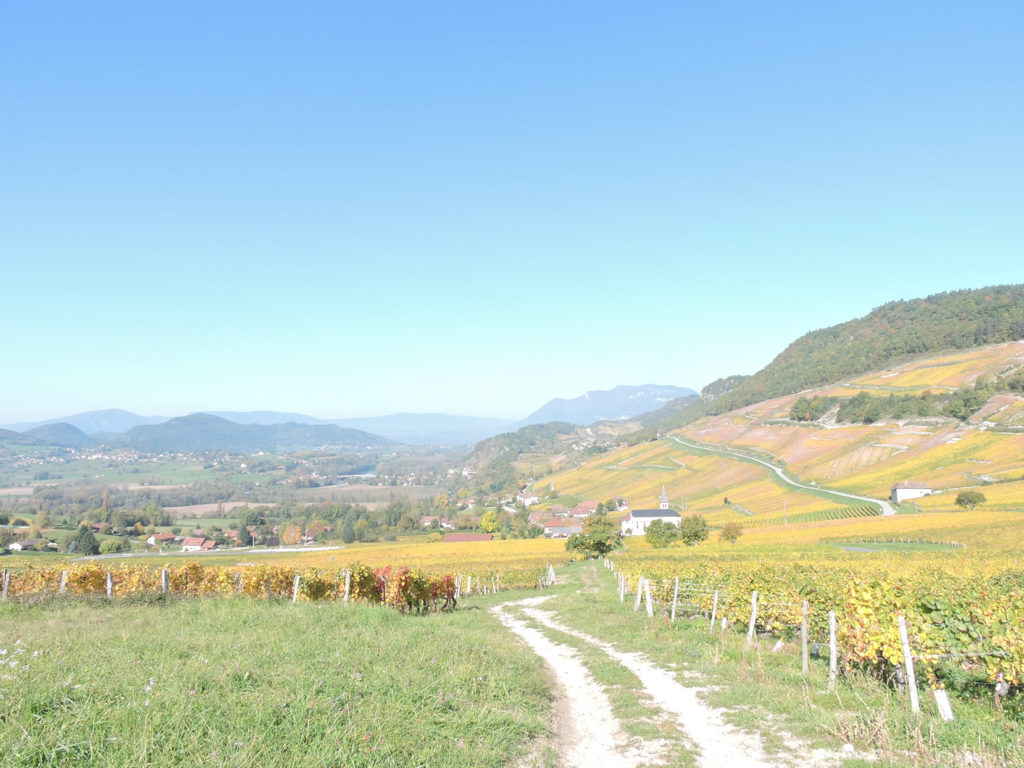 From here, the Grand Colombier mountain can still be seen looming on the horizon. 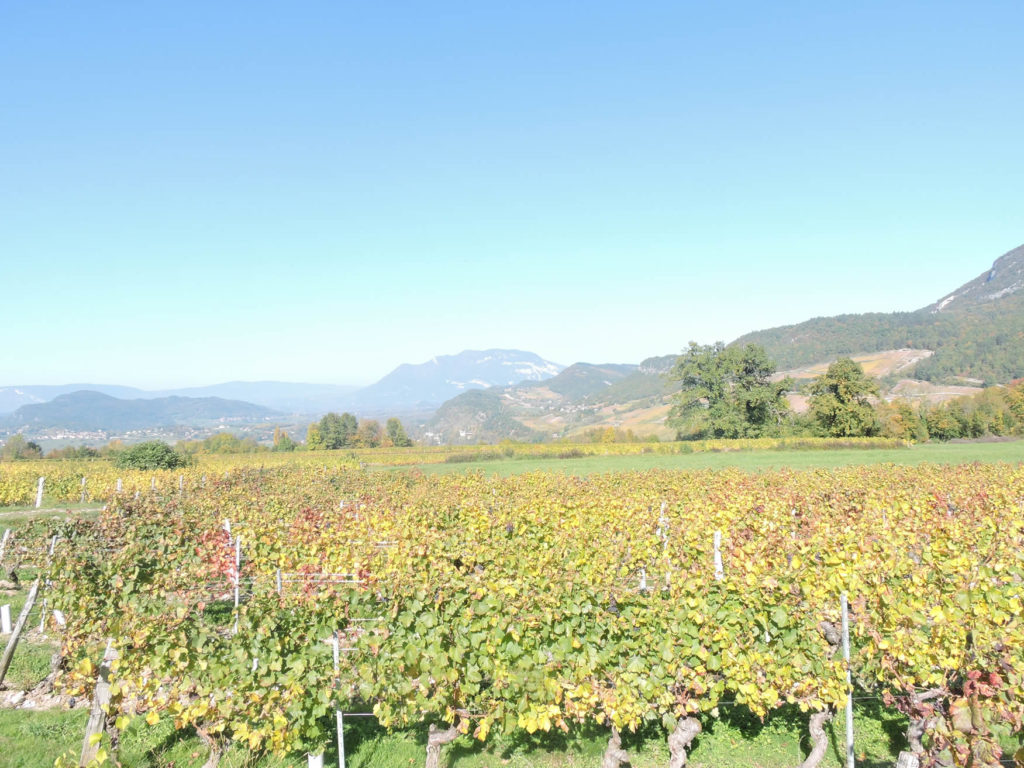 The St Romain chapel dates from 1995, unadorned, enthroned on the hill, solitary. It succeeds a primitive chapel which dates from the VIth century. 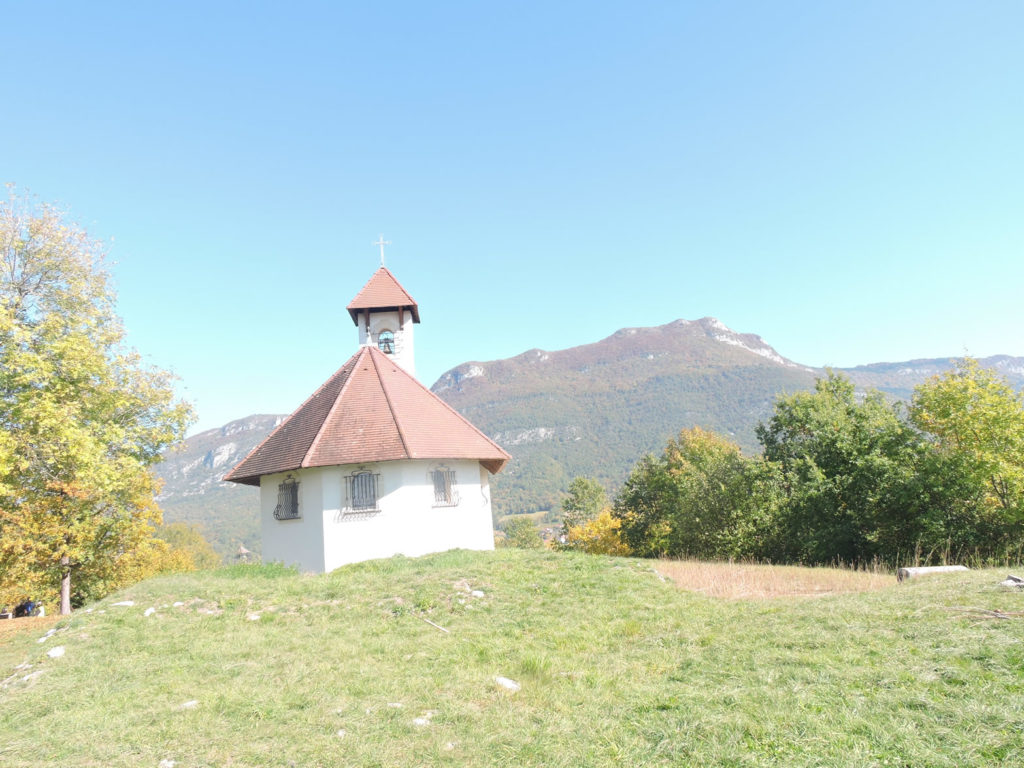 And for good reason. If you lean over the edge of the cliff you will see Lagneux village below. It’s more than 200 meters of vertical drop over 1 kilometer, sometimes with slopes of more than 35%. 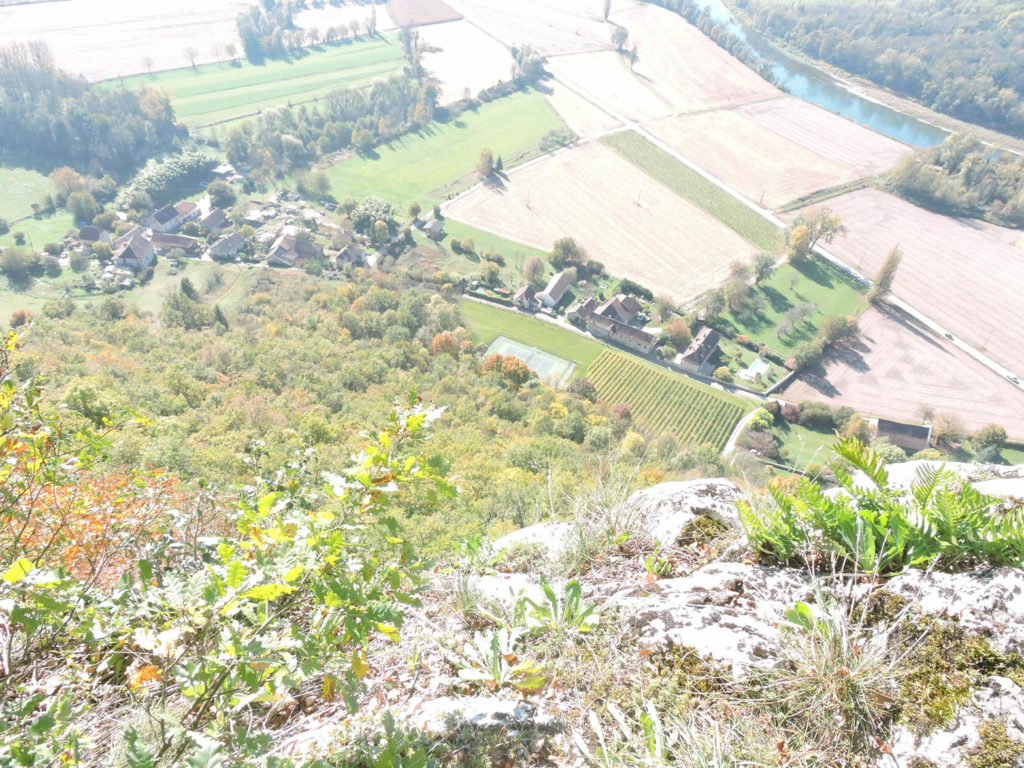 Section 6: A vertiginous descent, before joining the banks of the Rhône river. 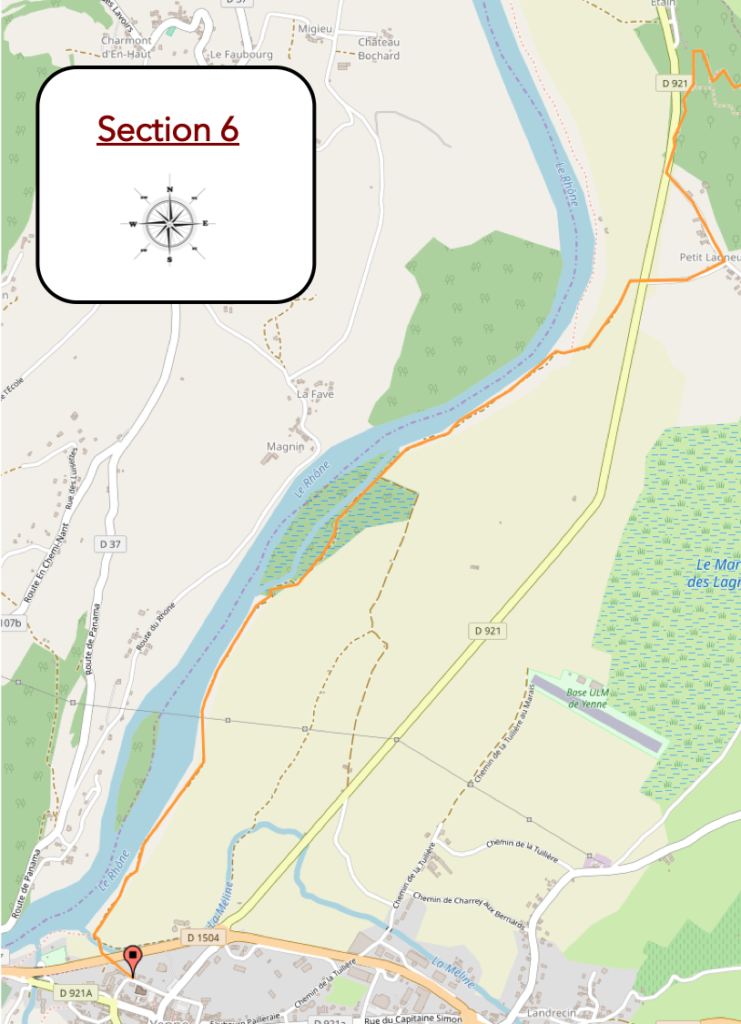 General overview of the difficulties of the route: quite difficult descent. The slopes here are up to 35% in a bad lane. Then, the holidays …

Whatever the weather conditions, you are happy for the knees and the joints, especially if they belong to the elderly, to reach the bottom of the descent, at the place named Cotonnière. 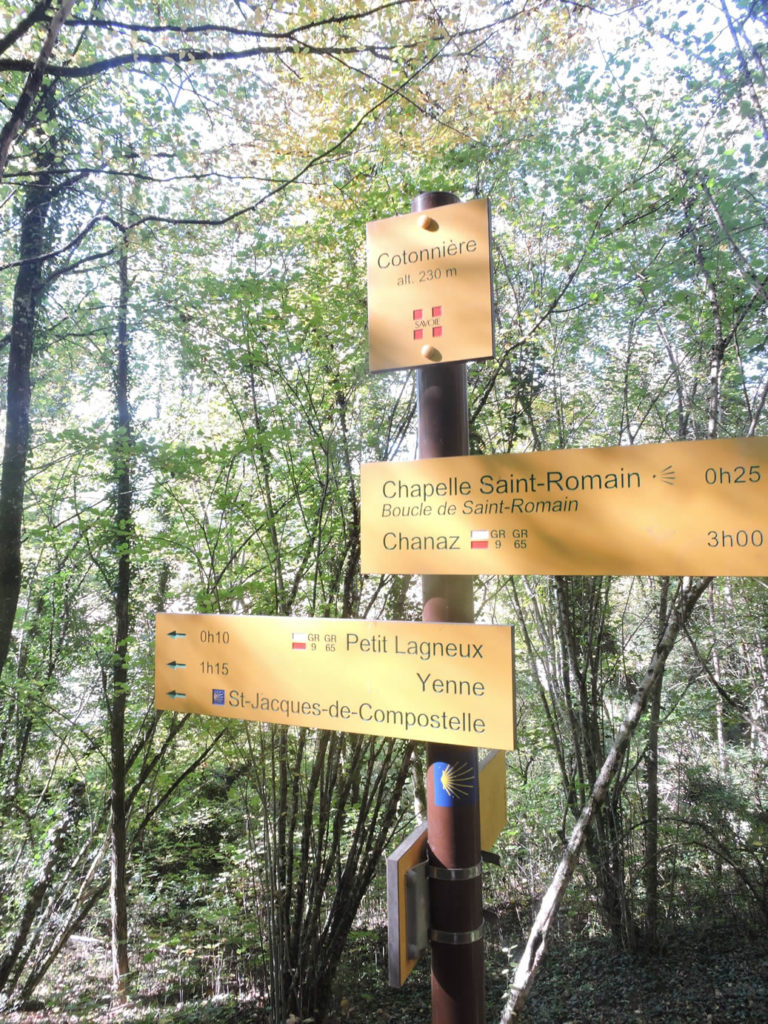 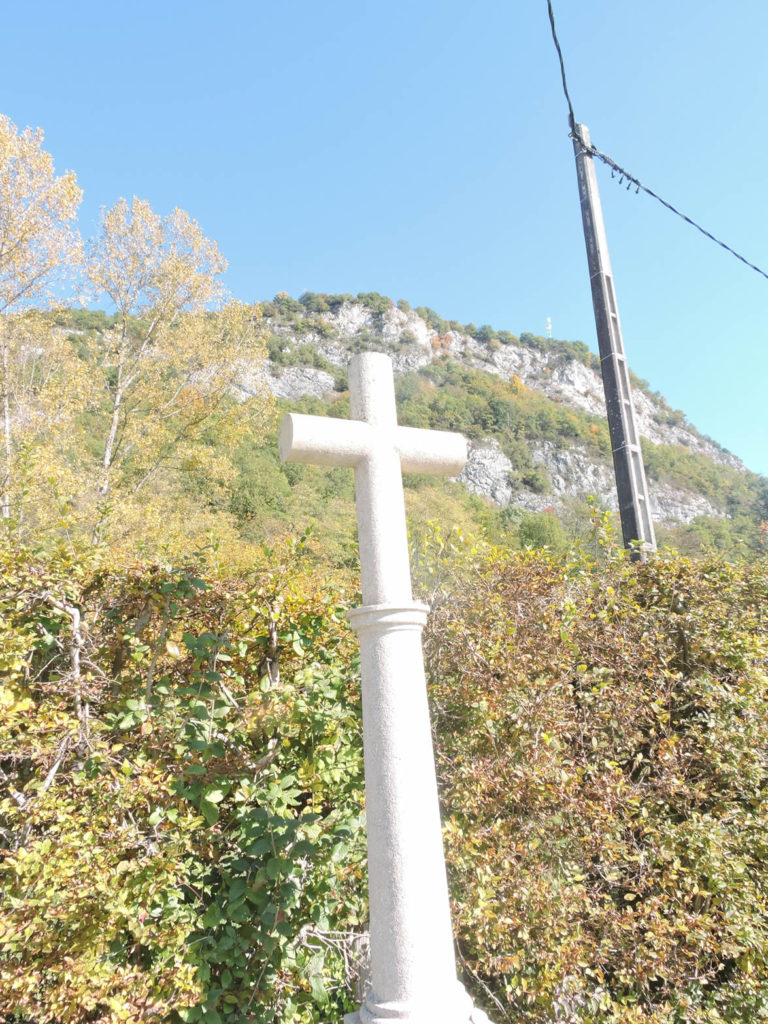 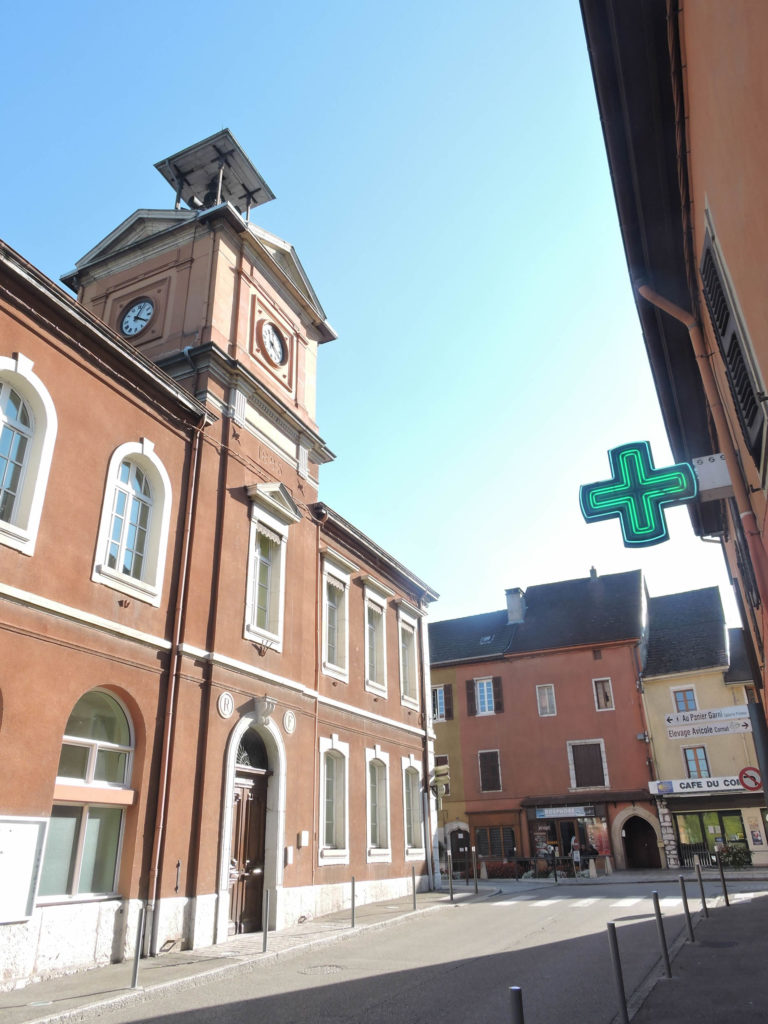