Incredible belvederes over the Rhône River

Today, in the late autumn, fog envelops the Rhône valley. Today’s stage is a very beautiful stage, one of the most beautiful of all the ways to Santiago, especially because of the incredible views over the Rhône River. In any case, it is undoubtedly the most beautiful of the Via Gebennensis, in good weather, in the large forest of Recoba above the Rhône valley, on a small mountain that separates the cul-de-sac of Yenne and the Rhône plain. At the top of the mountain passes the small pass of Mont Tournier, which cannot be said to be a very busy passageway, on a narrow road that twists and turns. Much of the stage, at least the first part, takes place mainly in the forest, with magical belvederes, where you can see the meanders of the Rhône River below in the plain. Obviously, you would have to go here on a sunny day, otherwise you will lose all of the magic of this stage. Alas, the pilgrim does not always have a choice!

But you shouldn’t be mistaken when you start from Yenne, because there are two tracks that lead to Mount Tournier. Do not take the variant that starts from the middle of the village. Take GR path, which leaves at the exit of the village, towards the cemetery. Warning! Take provisions with you. There are no grocery stores or bistros along the way, only a few water points. And even!

Difficulty of the course: Obviously, when you have a pass in front of you, slopes increase. It’s a difficult stage, let’s face it. Here slope variations (+992 meters/-987 meters) show an equivalence between climb and descent. You start from the edge of the Rhône and you arrive a stone’s throw from the Rhône River. But, in between, there is the pass. The path does not (but almost) run to the top of Mount Tournier, which is not, to tell the truth, a real mountain, but rather a big rounded hill. You will undoubtedly have the feeling that you have never faced a severe climb, because of the flats, even the descents. However, you start from an altitude of 230 meters to climb up to 850 meters. But over a long trip of over 12 kilometers, the effect wears off.

IIn this stage, a large part of the course takes place on forest paths. This is one of the rare stages of the Camino de Santiago where the tar is discreet:

Section 1: On the first hairpin bends of the pass to the Pierre Châtel Belvedere.

General overview of the difficulties of the route: paradoxically, on this long climb to the pass, you will not always have the feeling of a steep slope. There are, however, some passages at well over 15%. You just have to consider the profile of the section to get an idea of the proposed difficulty.

The first belvedere then appears: that of the tomb of Pierre Boisson. Born in 1819, he was a wealthy dentist but a freemason, he wanted to be buried in the cemetery of Yenne near the Madonna of the Mountain, but his request was refused. So, he built his own tomb on the other side of the valley. Today you will only see fog, with the tomb on the other side of the river.

A little up, on the rocks, between moor and forest, the pathway passes to the place called La Prison. But prison today is just fog. You have already gained more than 100 meters of altitude from Yenne in half an hour of walking. The Pierre Châtel belvedere is announced, 40 minutes from here. 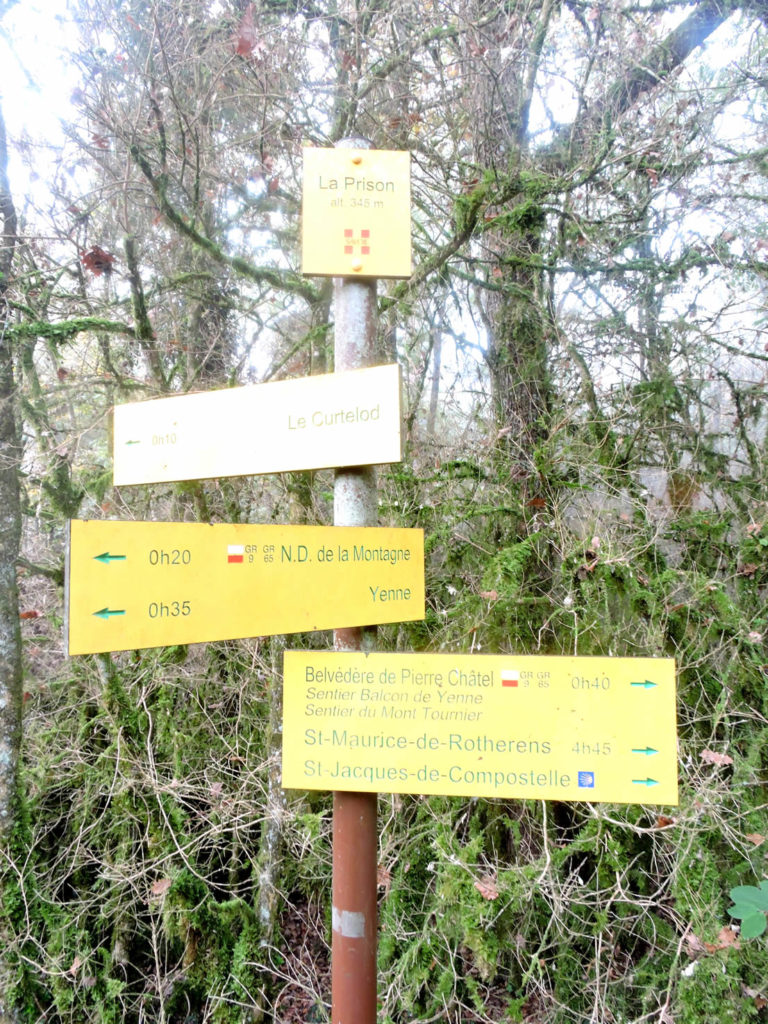 Today, the sun is pointing its nose, when you arrive at the Pierre Châtel belvedere. From La Prison, you went from 345 meters to 480 meters above sea level. 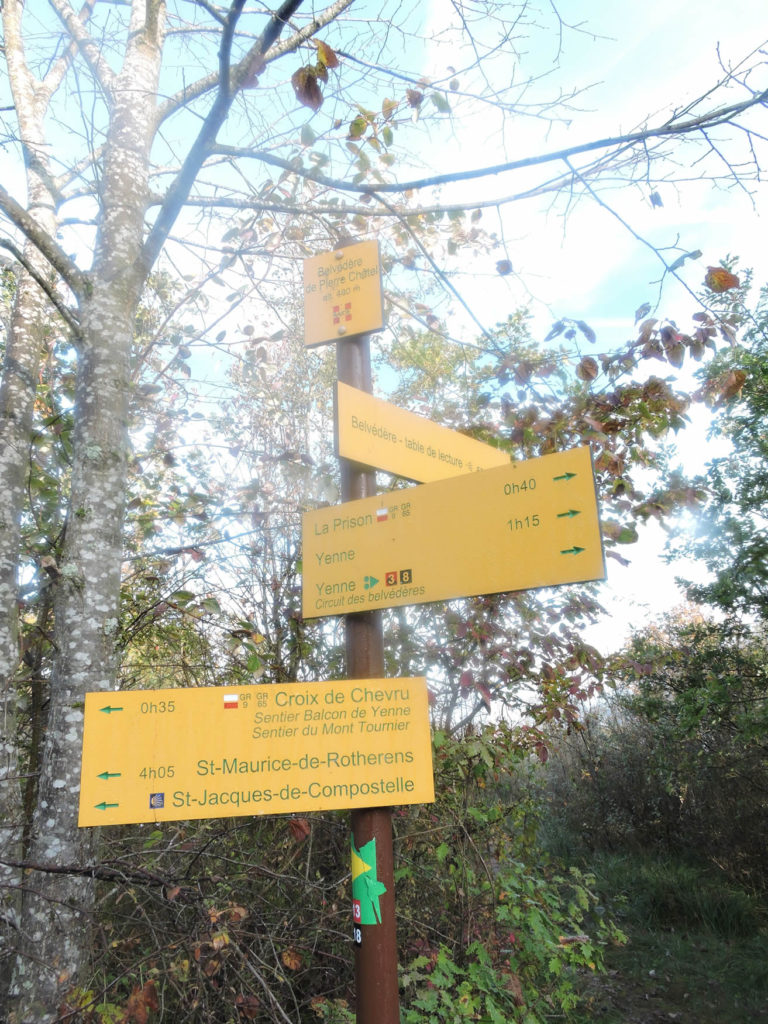 It’s even more spooky with the fog, and you go so far as to imagine enemies scaling the wall. 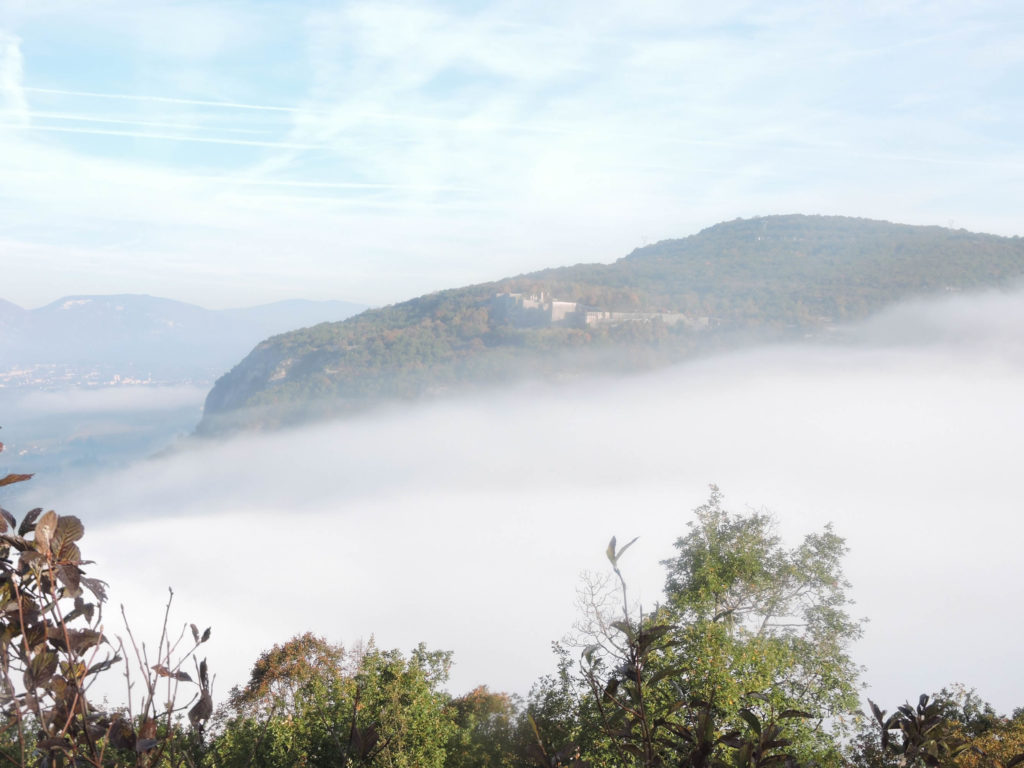 General overview of the difficulties of the route: paradoxically, on this long climb to the pass, you will not always have the feeling of a steep slope. On this section, the path makes constant yoyos, up, down, with some passages at well over 15%. You just have to consider the profile of the section to get an idea of the proposed difficulty.

But, just above, another belvedere, known as Rhône Belvédère is already in the sun. 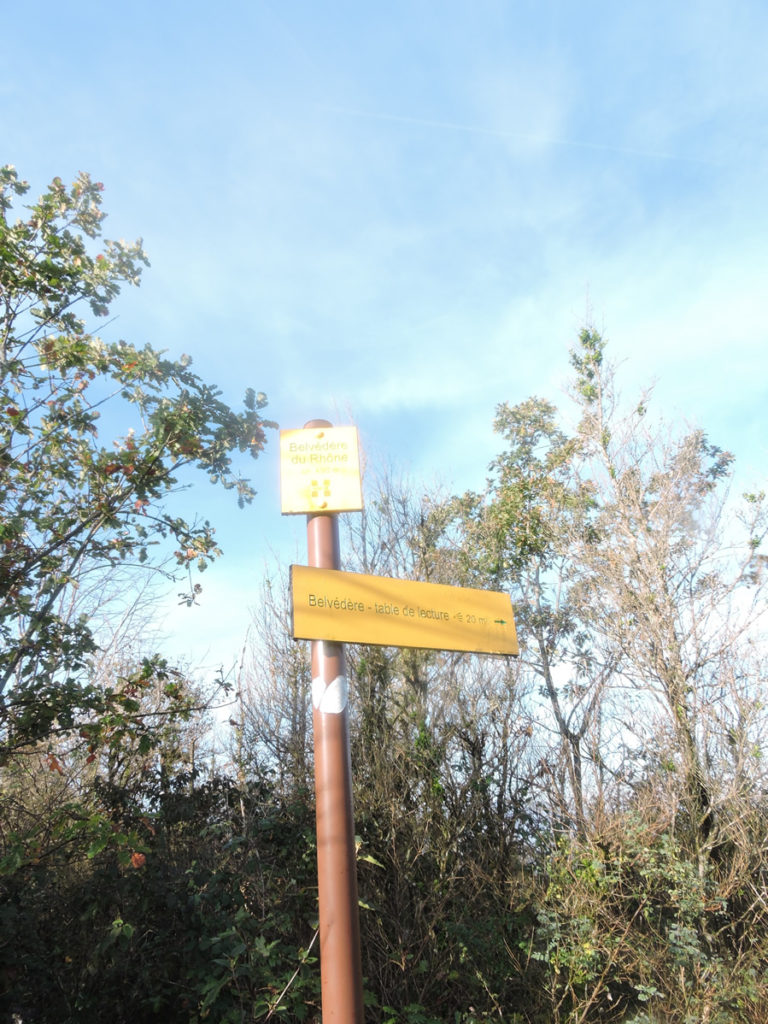 We don’t understand why the trees are so stunted here. It’s late fall and the hardwoods have lost their plumage, leaving bare trees and carpets of leaves. If in the lower part of the forest, it is often only brush and copses, as you slope up, small beeches appear, bower hedges among the pubescent oaks. But in this immense forest where deciduous trees dominate, you’ll see a mass of frail chestnut trees scattered in the middle of a few sorb trees, birches and maples. Here, the conifers are still minimal. 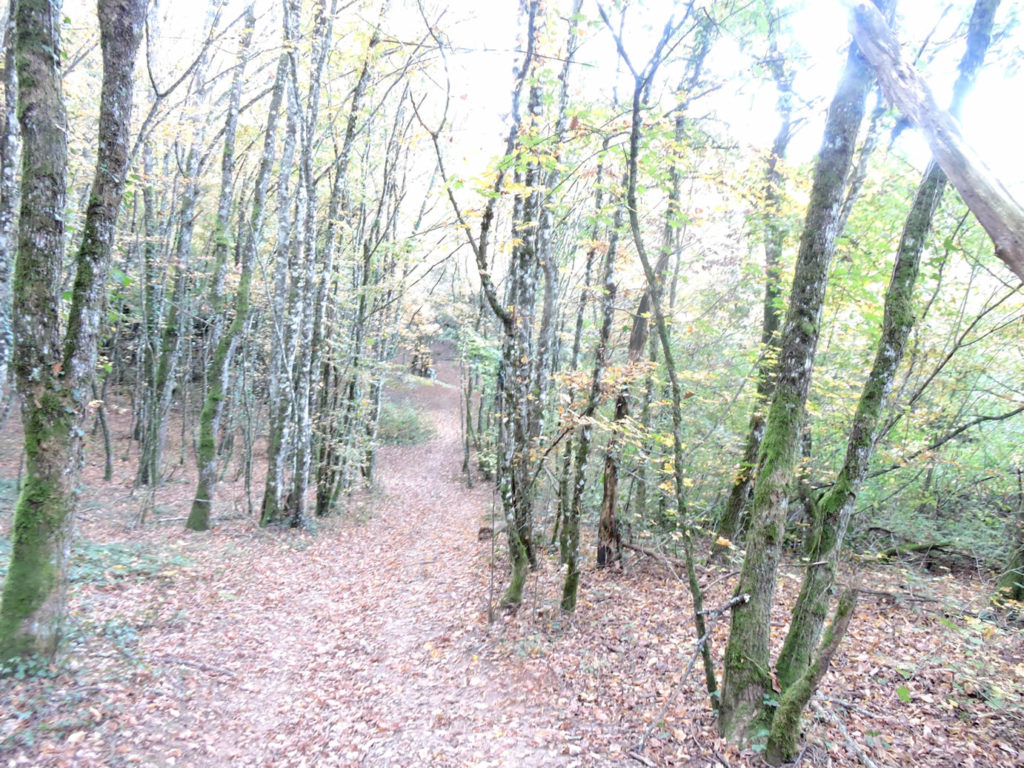 The pathway soon gets through a place known as Les Farnets. 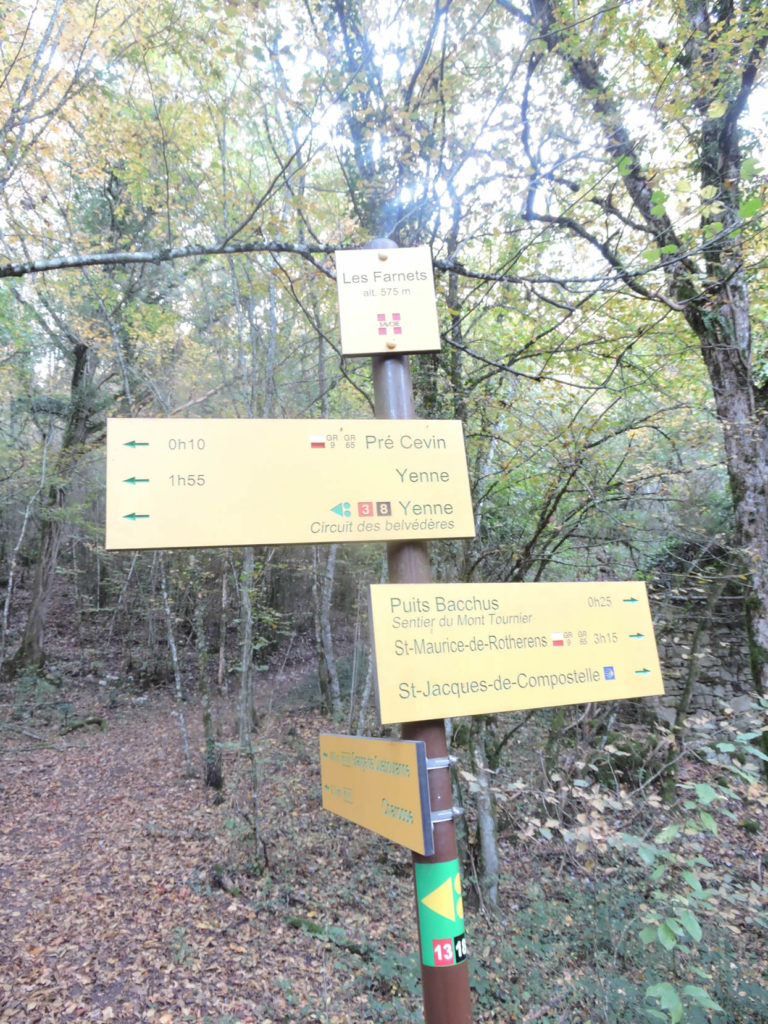 Further afield, the pathway descends a little to reach the locality called Puits Bacchus in the middle of the forest, at an altitude of 550 meters. You did not gain 1 meter in altitude beyond Chevru Cross, the pathway having only waved. But, you didn’t see the time go by. 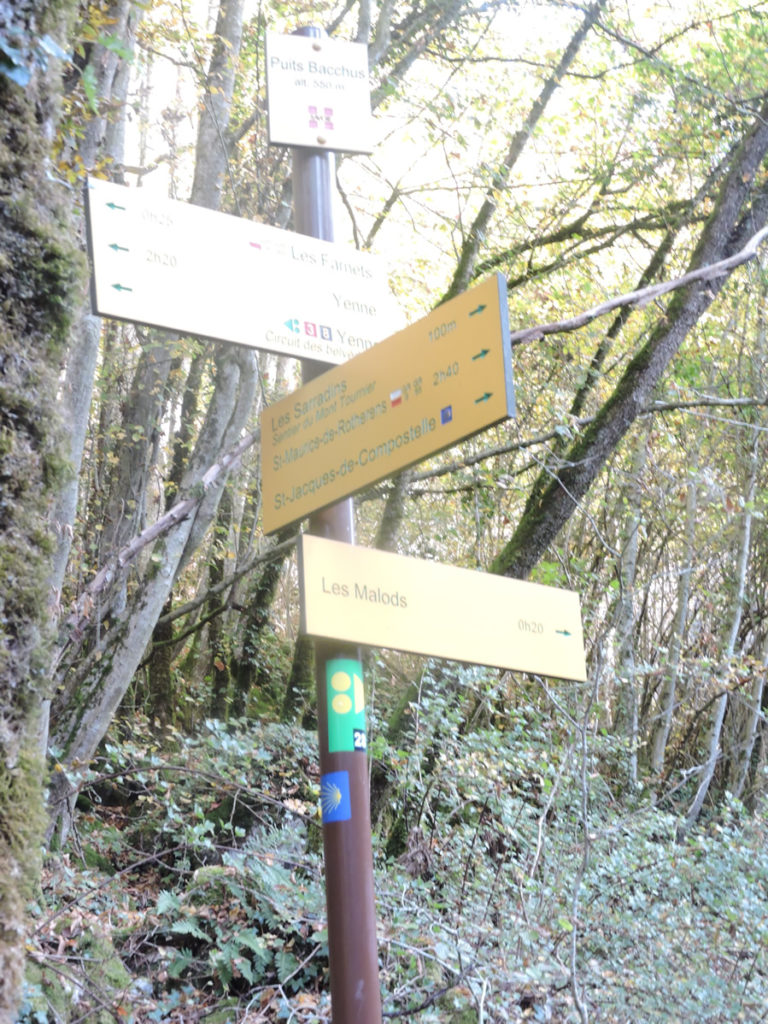 Section 3: : It’s even more beautiful at the Recoba Belvedere.

General overview of the difficulties of the route: : only the last slopes leading to the pass are really very steep, sometimes with almost 25% slope. You just have to consider the profile of the section to get an idea of the proposed difficulty.

The pathway gets to a place known as Les Saradins. These signs are very useful, because in this forest there are many other paths that crisscross the mountain. Our direction is still St Maurice-de-Rotherens, on the Camino de Santiago. 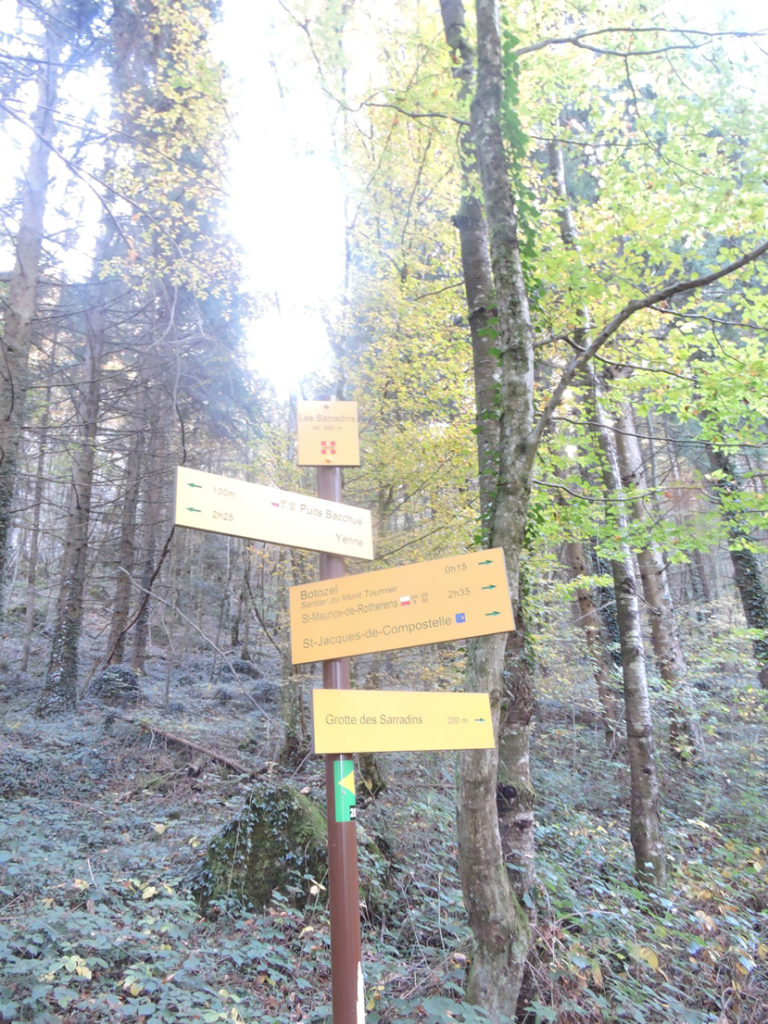 Here there is a water point and you may have the privilege of entering it during hunting season. When speaking with them, they give the feeling that the forest is theirs, but that they are also eager to share it with onlookers who venture there. In the past, this region was occupied by islands of resistance fighters resisting Nazi Germany. 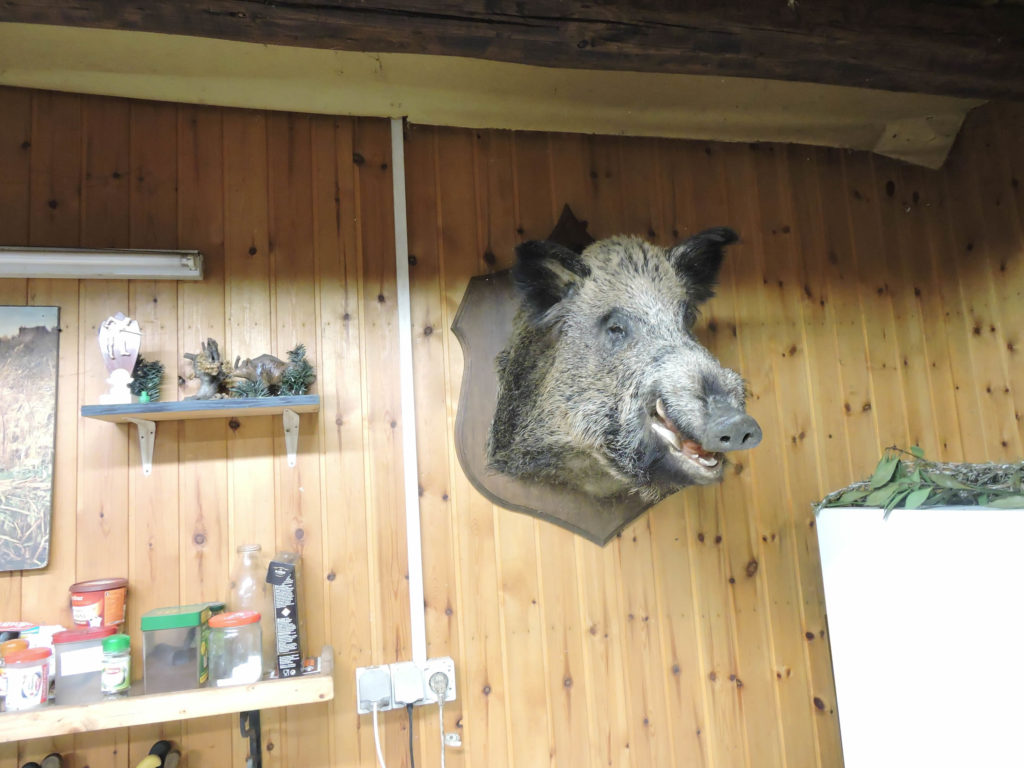 The pathway then arrives at the Recorba Belvedere, at an altitude of 690 meters. 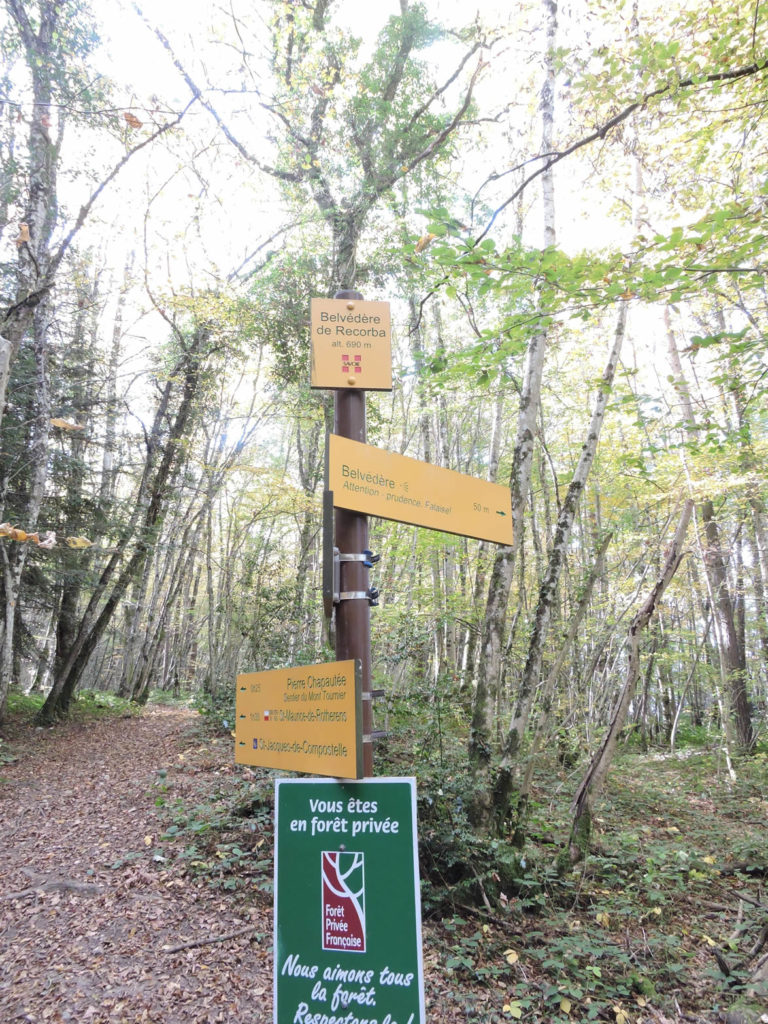 From the belvedere, the view plunges to the bottom of the valley and extends so far that you would soon have the feeling of seeing Lyon at the far end of the horizon. You could stay here for hours admiring the Rhône River, which from here seems like a modest blue stream, 300 meters wide, twisting like a worm in the land. The only comparison is that of a big river like the Mississippi or the Amazon seen from an airplane window. Goodness, how that nature can be beautiful, when it is generous! 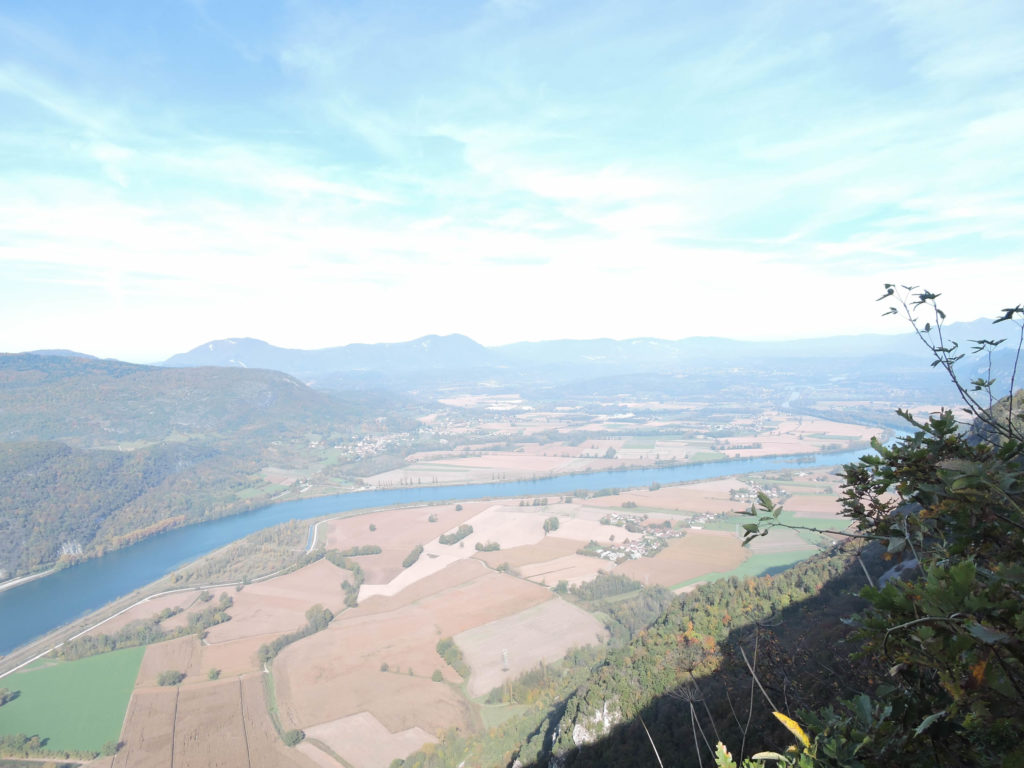 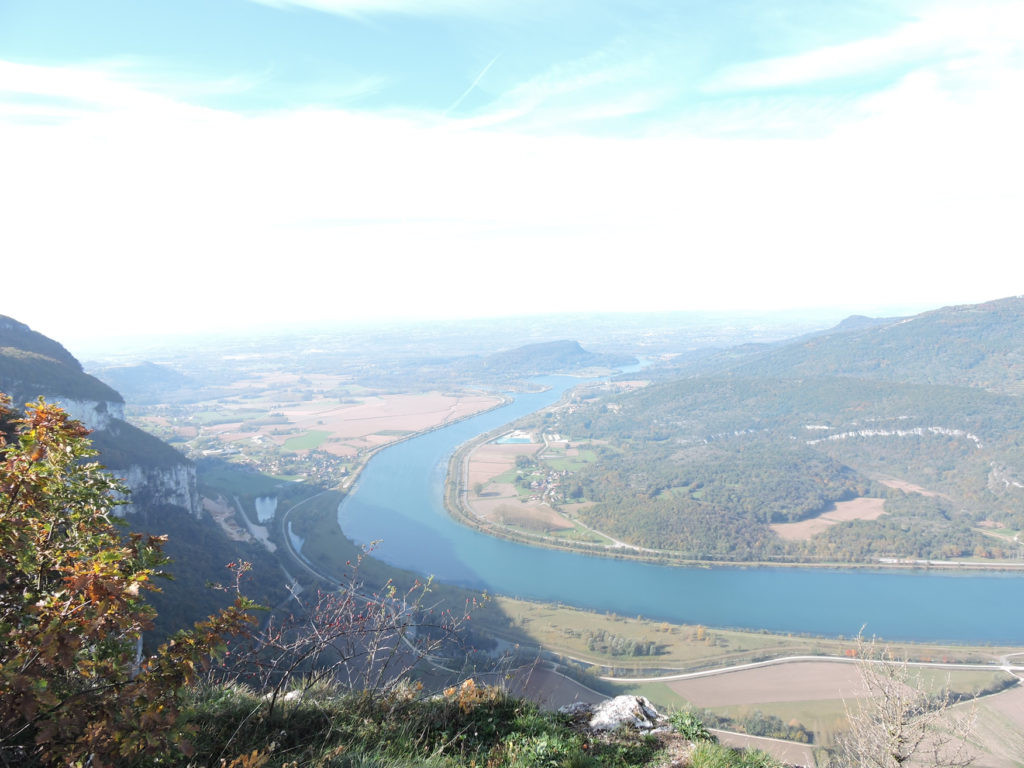 Section 4: Coming down from Mount Tournier.

General overview of the difficulties of the route: descent, sometimes with a flat area or even a climb. But, this is not an easy descent, with sometimes steep slopes.

Further ahead, the pathway descends to the locality named La Dronière. Here, you can reach the Mont Tournier pass. Two steps from here. The other route, which starts from the center of Yenne, runs over the pass. But, at the pass, there is nothing to see, only a small road where a vehicle rarely passes. 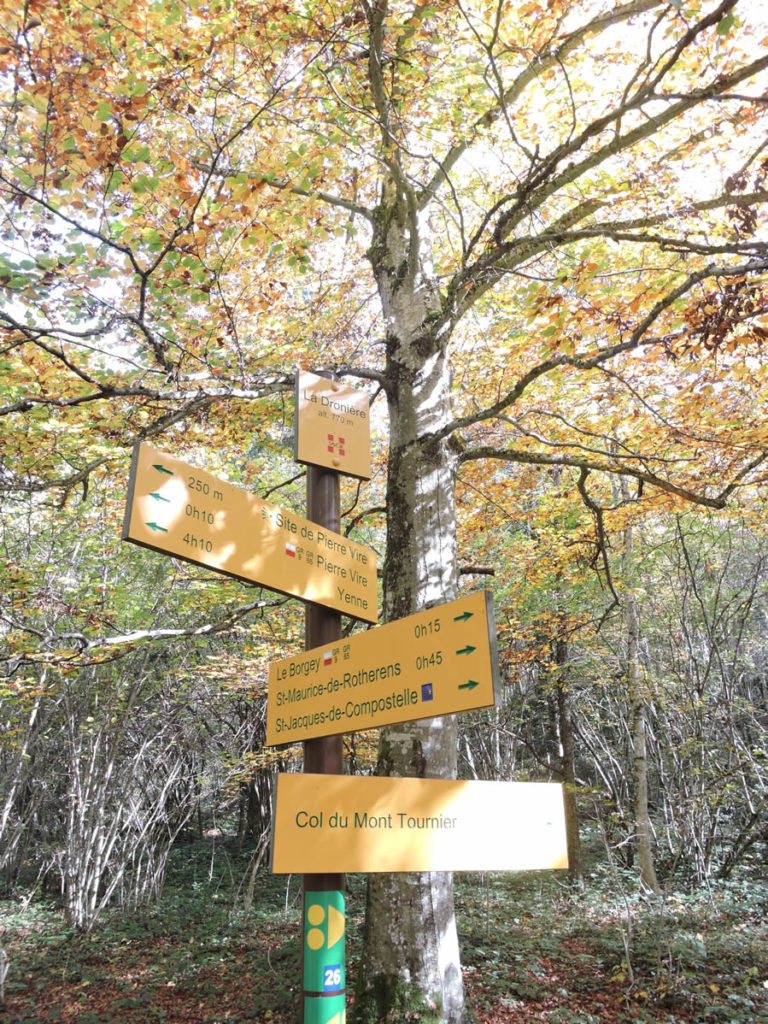 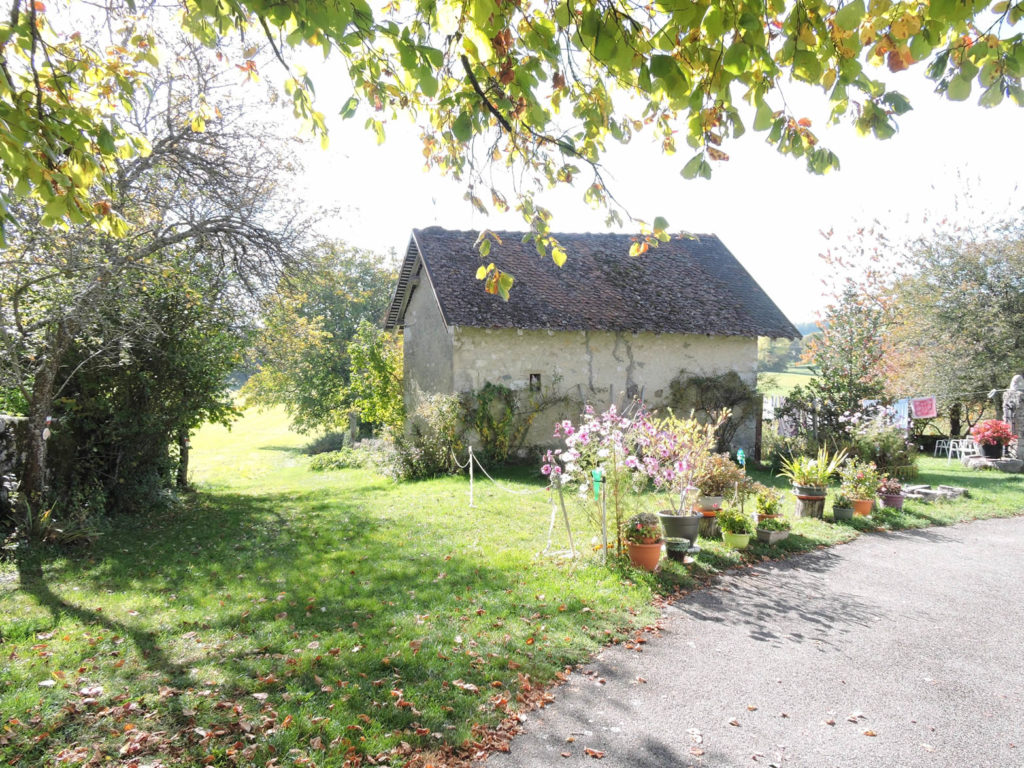 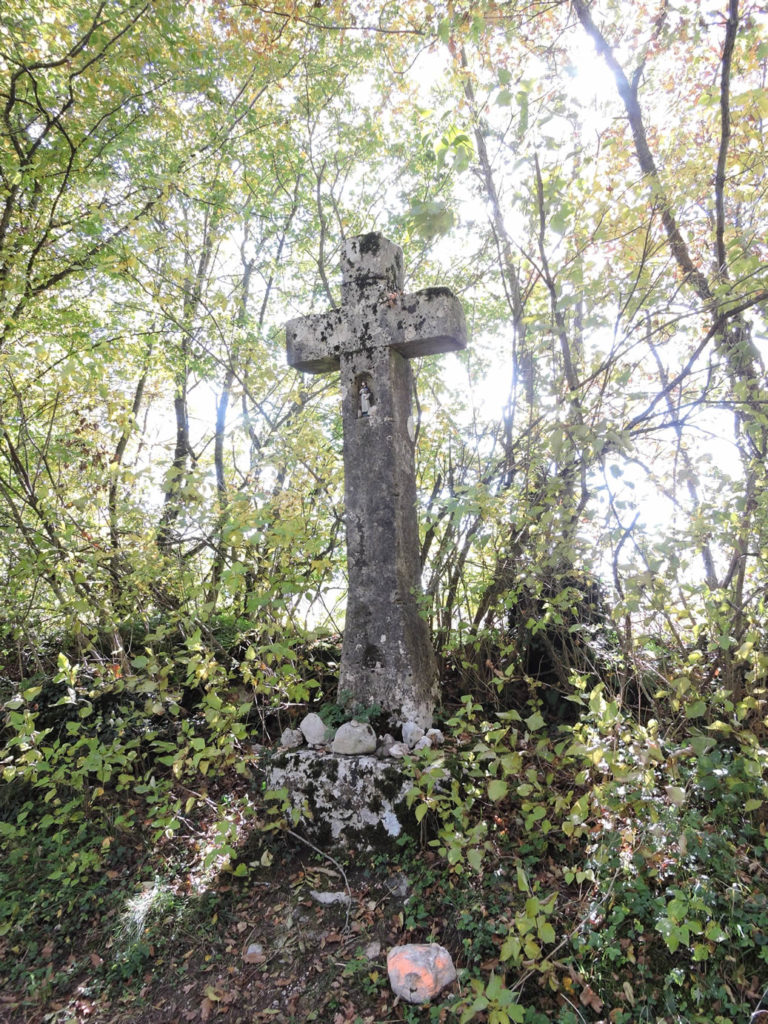 Section 5: Continuous and demanding descent to the bottom of the valley.

General overview of the difficulties of the route: slopes of more than 15% abound on the route. You just have to consider the profile of the section to get an idea of the proposed difficulty. 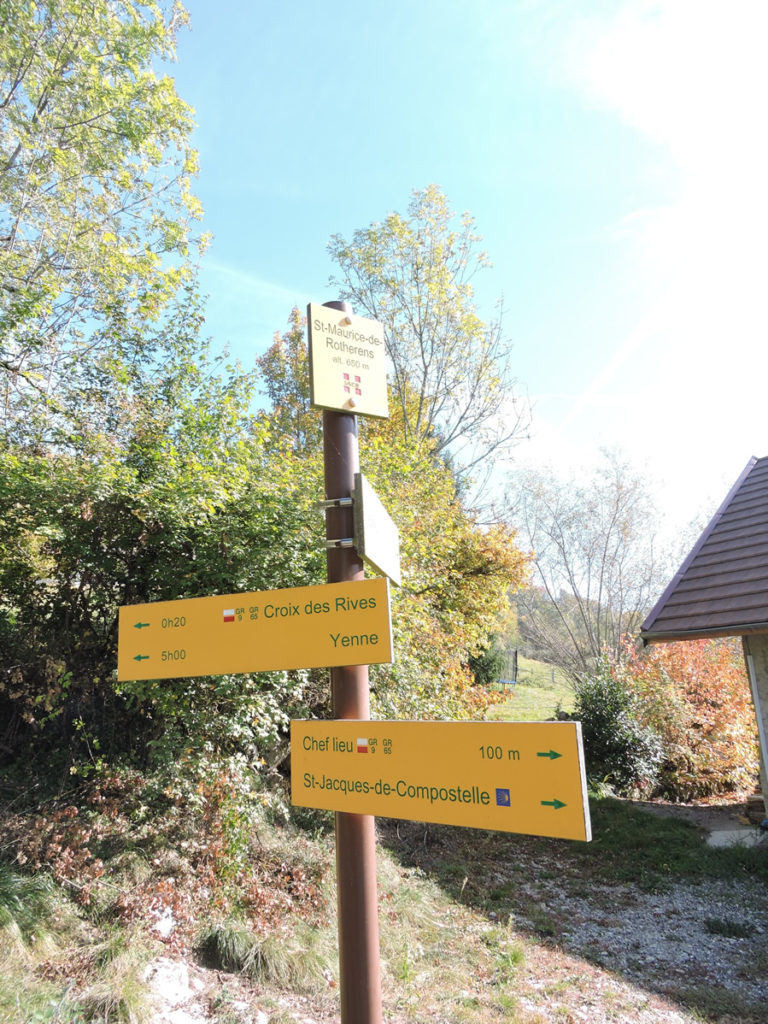 The country opens up a little more when you leave Malbuisson, which is only touched on. 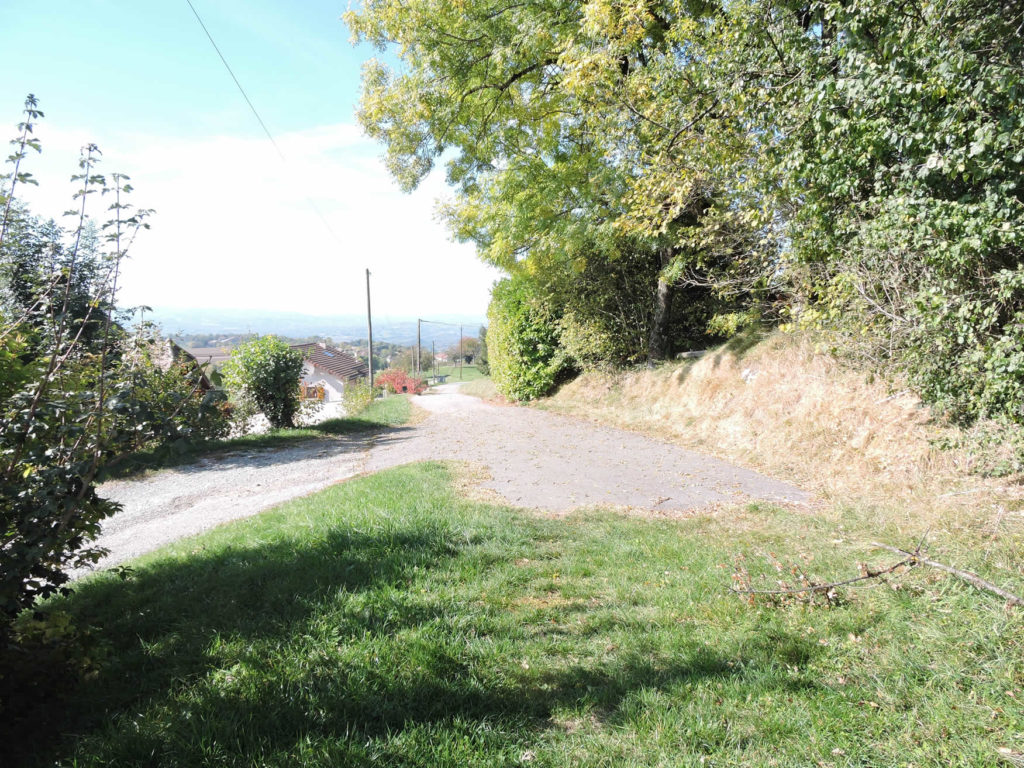 Section 6: The route returns to the Rhône plain. 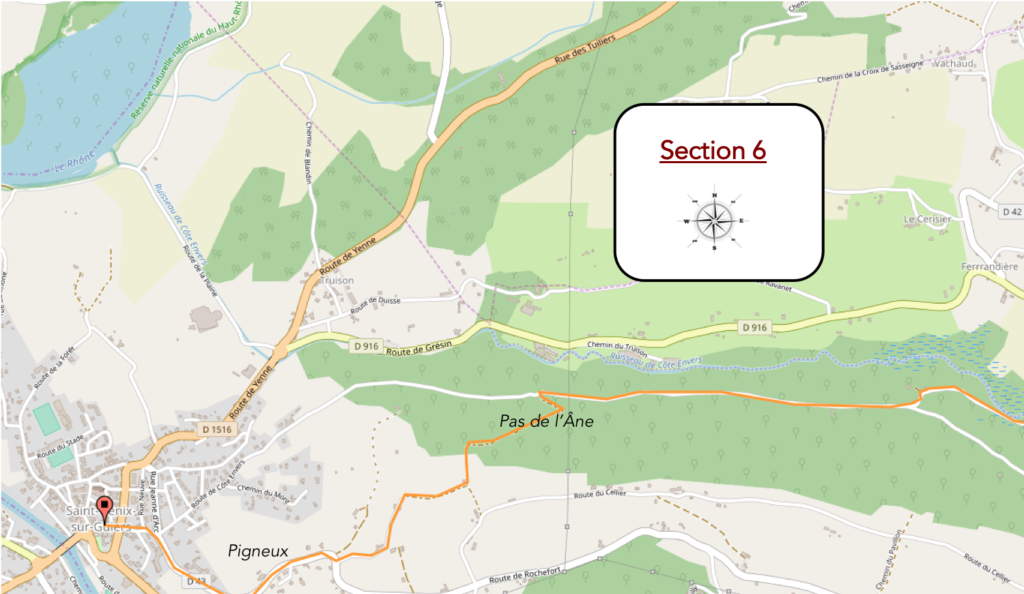 General overview of the difficulties of the route : still just a small bump, ladies and gentlemen! 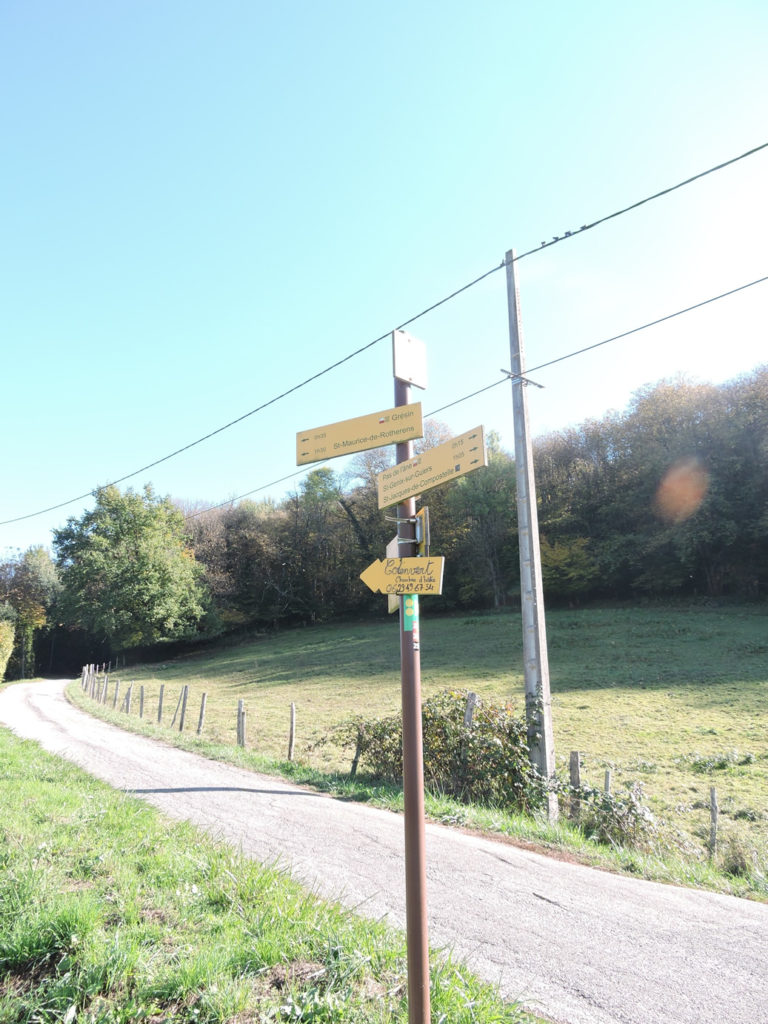 On the road, you will find a fork in the place called Pas de l’Ane. Here, GR path invites you to walk back into the woods. If you go there, don’t expect to find exceptional scenery above. But, if GR path passes here, it is because it allows you to reach the chapel of Pigneux above St Genix-sur-Guiers. So, depending on your state of fatigue, you may as well continue on the road which leads you directly to St Genix. 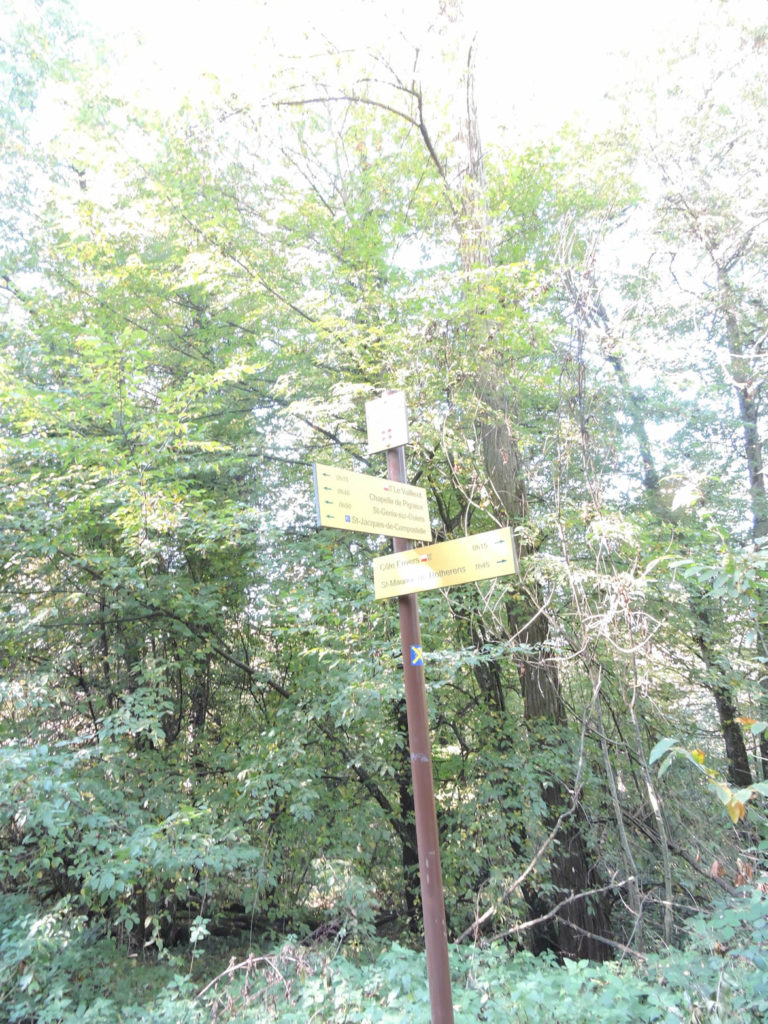 The climb is not eternal and, at the end of the woods, the pathway leads to a small plateau at the place called Le Vuillerot. 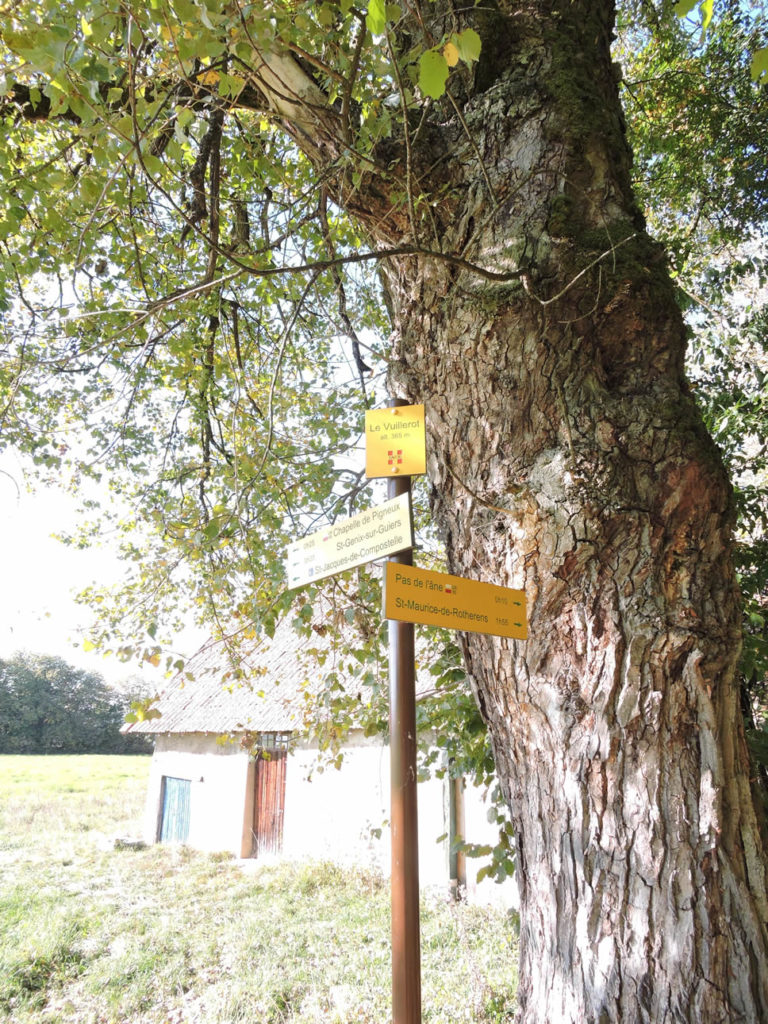 St Genix-sur-Guiers (2,500 inhabitants) has a long history. Being ideally placed, it has known constant quarrels over the centuries between Savoy and Dauphinois. It was even, at one time, a fortified town with a castle and ramparts. It has lost its fortifications, with the exception of a gate and some vestiges of the ramparts. 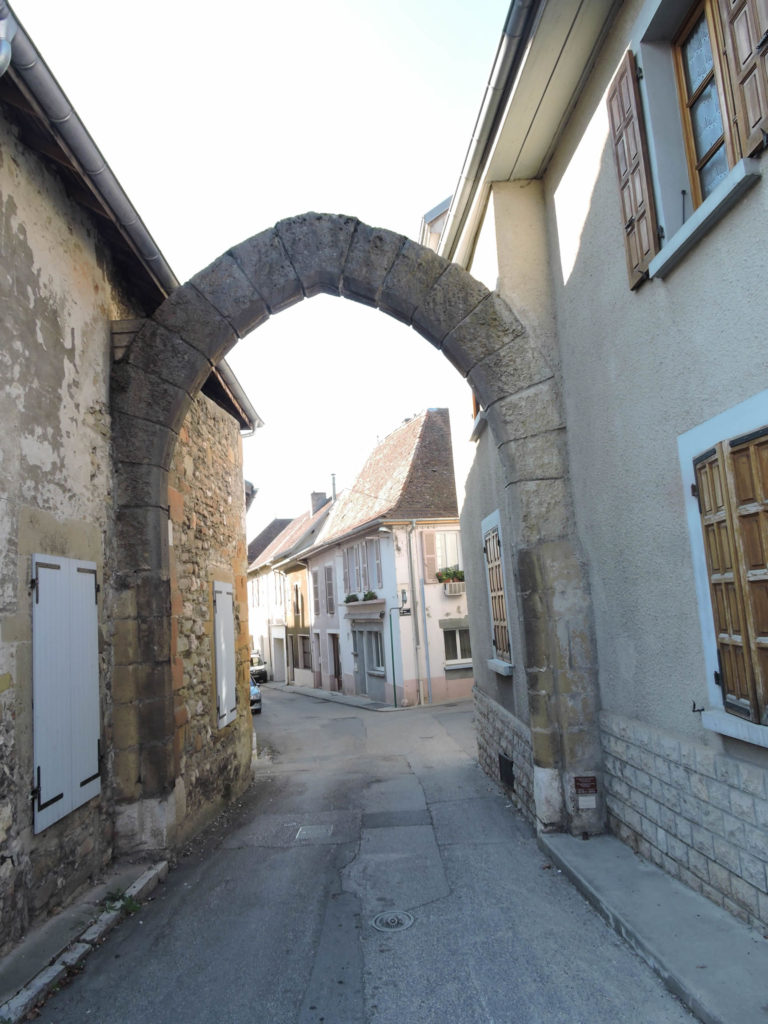